Living in the North East and Cumbria

The North East and Cumbria has an international reputation for innovation and is a rewarding place to live and work in with its vibrant cities, beautiful coasts, lakes and countryside.

The region has great transport links and infrastructure and has some of the lowest commuting times in the country. With two major international airports as well as excellent road, rail and sea links, the North is well connected for commuting and travelling. The A1 provides easy access both north and south whilst the A66 and A69 connect directly to the M6 making it easy to reach the Lake District and the Midlands. Tyneside operates a Metro light rail system which has 60 stations connecting Newcastle, Gateshead and Sunderland.

The North East and Cumbria are two of the best value regions in the in the UK. With no compromise on the quality of property, culture, food and entertainment available, you’ll be amazed at how much further your money goes. The region offers really good value with lower than average housing costs. The UK average house cost is £271,000 but in the North East this is £149,249 and North West £197,797. So whether you’re looking to rent or buy there’s plenty to choose from with a wide range of housing available. Whatever you’re looking for from a traditional Victorian terrace, new build detached, city flat or Manhattan style loft apartment you can find it here.

Families moving to the North can be reassured that our healthcare provision is Outstanding, with several NHS services rated as the best in England. Patients in the North also have a shorter wait than most. In fact NHS North East is the only region to hit both government targets for treatment times.

The quality of schools in the region are excellent and perform above the national average. 72.3% of north east pupils achieve five good grades across all subject areas compared nationally to 69.7%. The North East’s independent schools also have a strong track record.

The North has six universities – Durham, Newcastle, Northumbria, Sunderland, Cumbria and Teesside as well as over 25 further education colleges covering every possible vocation from TV production to marine engineering.
Durham University consistently ranks among the top universities in the world and is investing £200m on the campus while Newcastle University is a hub for world class research with one of the country’s best medical schools. 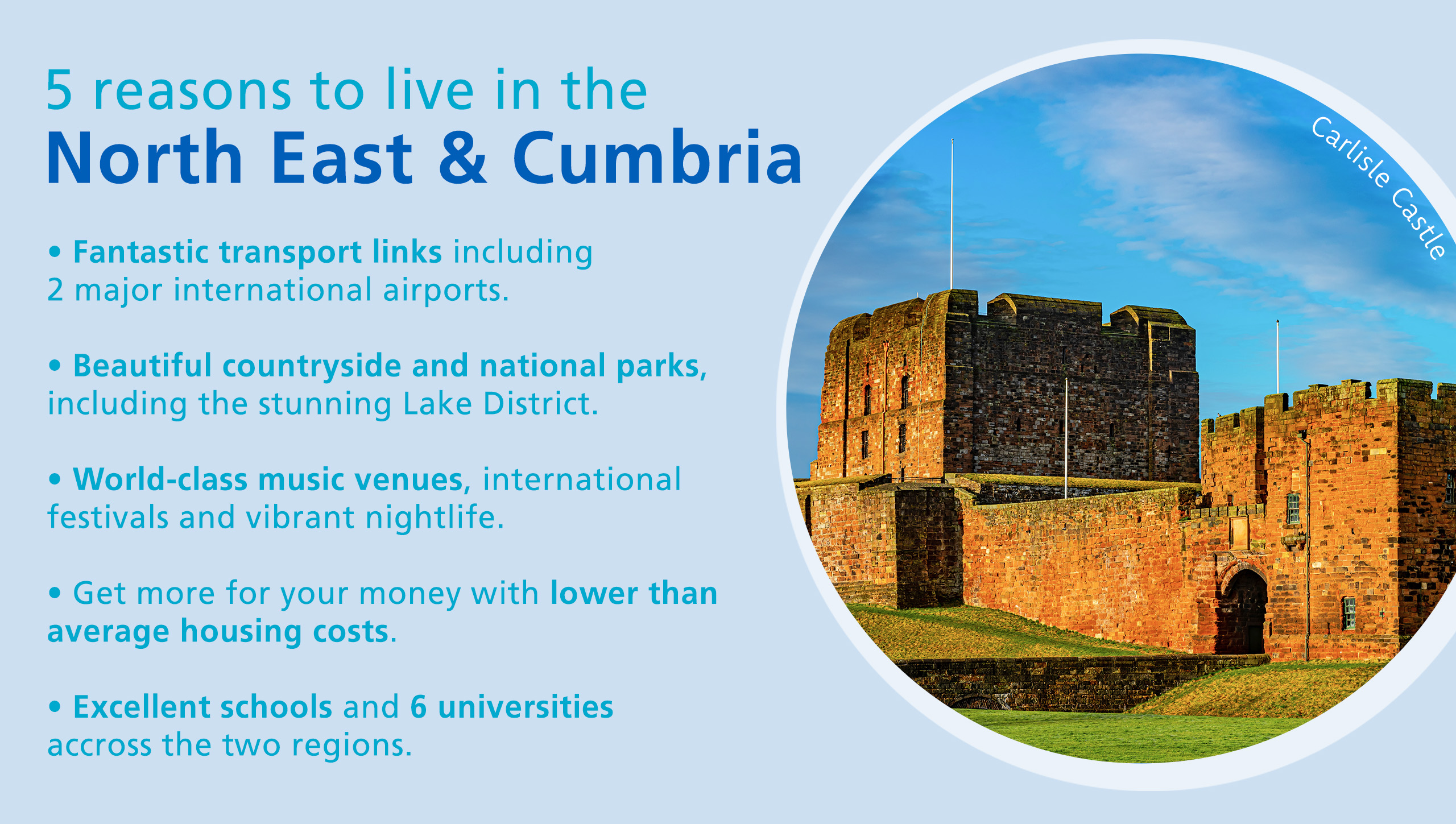 The region boasts large capacity venues, international music festivals and a vibrant nightlife and you will never be short of something to do. The North East offers world-class music venues catering to every taste, a thriving comedy scene and more theatres per person than anywhere in the UK. The North East has a buzzing cultural scene with an array of museums and art galleries, including the landmark Baltic gallery and the popular Beamish open air museum. With three World Heritage sites, Durham Cathedral, Hadrian’s Wall and the Lakes National Park, the area is steeped in a rich cultural heritage. Cumbria is home to Scafell Pike – its highest mountain, Wastwater – its deepest lake and thriving communities like Keswick and Bowness-on-Windermere.

The North is famous for its friendliness and hospitality. There are a wide range of mouth-watering restaurants and pubs, from fine dining and family gastropubs to traditional inns and bohemian cafes. There really is something for all tastes.

With three major football clubs plus world class golf, cricket and rugby teams, the region has a love of sport and is probably most well-known for hosting the Great North Run, the world’s biggest half marathon. If you prefer playing sports rather than watching we have fantastic coastline for diving, sailing and outdoor pursuits, beautiful countryside in the Lake District and a wide range of leisure and fitness facilities.

If shopping is high on your agenda then Gateshead’s Metrocentre is one of Europe’s largest shopping centres with over 300 stores and free parking. There is also a large range of shops in Newcastle’s Eldon Square and The Bridges shopping centre in Sunderland. If bustling shopping centres aren’t your scene, the North also has its share of thriving, pretty market towns. The markets at Alnwick and Hexham are among the top 12 in the UK.

If you’re keen to get out walking, there’s no where quite like the Lake District.  Its well known for its fantastic trails and mountains, such as Scafell Pike, the highest mountain in England which stands at 978 metres tall. if you’re after a more laid back pace, simple and easy walks are in abundance here. Along the way, you’ll have the chance to enjoy many bodies of water, spectacular views and gorgeous wildlife.

Come take a look, we’re sure you’ll love it.