St. Nicholas Hospital sits in beautiful Victorian parkland in the heart of Gosforth, Newcastle. It is home to a range of clinical departments, as well as the majority of our corporate services. 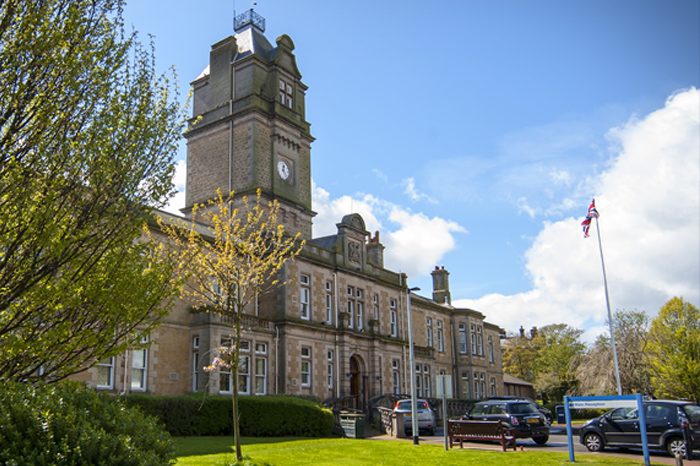 The main reception of St. Nicholas Hospital is tucked beneath our old Victorian clock tower. This is at the heart of the site and is the best place to go to if you need directions to one of the many departments we have here.

St. Nicholas Hospital provides a range of clinical services, including:

Some of our community services are also based at St. Nicholas Hospital.  See our service directory for more information.

In addition to clinical services, the majority of corporate services for the Trust are also provided at St. Nicholas Hospital, including corporate affairs, human resources and finance.

There has been a hospital on this site since the 1860s. In 1884 permission was granted to extend the hospital, and the East and West Pavilions were completed in 1887.

The grounds are also home to a Northumberland Wildlife Trust office and a Royal Mail postal depot.

St. Nicholas Hospital has a theatre onsite, the Jubliee Theatre, which opened in 1899. It is used for lectures and trust events, as well as by two theatre groups, Juniper Productions and First Act Theatre.

The site is made up of 12 hectares of land with mainly Victorian style buildings, some new-build facilities and a number of other buildings. Newer builds include the Bamburgh Clinic, which was completed in 2006. In 2009, The renovation of the Victorian hospital building was nominated for the Best Design in the Community Benefit category of the Royal Institute of Chartered Surveyors North-East Renaissance Awards. The majority of the site is subject to a conservation order through the local planning and Local Development Framework.

We want to hear from you