NHS staff flying the flag for the LGBT+ community 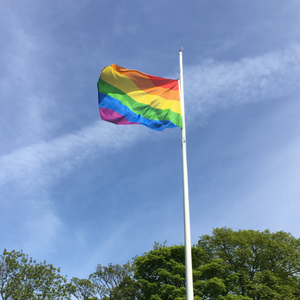 NHS staff in the North East are flying a rainbow flag in support of the International Day against Homophobia, Biphobia and Transphobia (IDAHOBIT).

Staff at Northumberland, Tyne and Wear NHS Foundation Trust (NTW), which provides mental health and disability services across the North East including a regional Gender Dysphoria service, are showing their support for the Lesbian, Gay, Bisexual and Transgender (LGBT+) community by flying a rainbow flag at St Nicholas Hospital in Newcastle.

The flag is being raised at 11:00am on Friday 17 May to raise awareness of violence, discrimination and the repression of LGBT+ communities worldwide. Members of the Trust’s LGBT+ Network will then be hosting an engagement and information stall at the St Nicholas Café from 11:30am.

IDAHOBIT was set up in 2004 to highlight the violence and discrimination faced by those within the LGBT+ community across the world.

According to the International Lesbian, Gay, Bisexual, Trans and Intersex Association (ILGA) there are still 11 countries in the world that have a death penalty for consensual same-sex sexual acts between adults.

Stonewall produced a report in November 2018 investigating the specific experiences of LGBT people when accessing healthcare services in the UK.

These are issues that are affecting service users that we work with and the colleagues we work alongside. On the day, we would like you to show your support on social media if you can. Please use the hashtags #NTWLGBT  #IDAHOBIT and #IDAHOT at the end of your posts so that we can all see what we are doing.

NTW was officially recognised as a ‘Diversity Champion’ by LGBT charity Stonewall earlier this year. The Trust’s LGBT+ network has also recently launched a new LGBT Allies Programme, which supports staff to use their knowledge and skills to foster a safe atmosphere for LGBT+ staff and service users.