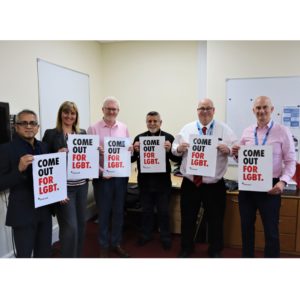 One of the North East’s largest NHS Trusts has officially been recognised as a ‘Diversity Champion’ by LGBT charity Stonewall.

Senior representatives including Board members from Northumberland, Tyne and Wear NHS Foundation Trust (NTW) met with Stonewall Scotland Programmes Officer Phillippa Scrafton and members of the Trust’s LGBT+ Network to formally launch the Diversity Champion programme in the Trust.

One of our Trust’s core values is to be caring and compassionate to everyone we serve. This includes making sure all our staff are treated equally and experience a caring and inclusive working environment.

We are thrilled to be joining Stonewall’s Diversity Champion programme and hope that our membership will make NTW an even more attractive place to work.

We are delighted that Northumberland, Tyne and Wear NHS Foundation Trust has fully embraced its status as a Stonewall Diversity Champion by supporting the programme at Board level. We are looking forward to working with the Trust to support the process of embedding inclusion across the entire organisation.

From our Network’s perspective it’s really important that all staff in our Trust are fully aware of the needs of our LGBT+ service users, so that we can offer them the best possible care. Being part of the Diversity Champion programme is a hugely positive step which is going to move our Trust forward in achieving this.

Stonewall’s Diversity Champion certification recognises employers in the UK and beyond which choose to make a positive and prominent commitment to ending discrimination in the workplace and improving the lives of LGBT+ people both in work and in the wider community.

NTW joins over 750 organisations which are part of the programme, including North East public sector employers such as the North East Ambulance Service, Tyne and Wear Fire and Rescue service and Northumbria Police.

In addition to creating free awareness training sessions for all its staff, NTW’s LGBT+ network has also just launched a new LGBT Allies Programme, which supports staff to use their gained knowledge and skills to foster a supportive and safe atmosphere for LGBT+ staff and service users.

The Trust’s LGBT+ network has also recently worked with Pride Radio, the North East’s only dedicated lesbian, gay, bisexual and trans radio station, to engage with the wider community and promote a greater awareness of LGBT+ and mental health issues.

As part of their Diversity Champion commitment NTW is working towards submitting an application to Stonewall’s Workplace Equality Index (WEI), a national benchmarking tool which evaluates in detail what UK workplaces are doing to support their LGBT+ staff and showcases the best employers across the country for lesbian, gay, bi and trans staff.

NTW is one of the largest mental health and disability Trusts in England and has over 6,000 employees based at more than 60 sites across Northumberland, Newcastle, North Tyneside, Gateshead, South Tyneside and Sunderland including seven hospitals.

NTW is one of only two mental health trusts in the country to be given Outstanding status by the Care Quality Commission, the best possible rating.

The Trust was also named as one of the top 100 NHS Trusts to work for by the Health Service Journal (HSJ) in 2015, and received the HSJ’s highly acclaimed national award for ‘Provider Trust of the Year’ in 2017.

More information about NTW’s LGBT+ network is available at www.ntw.nhs.uk/lgbt – you can also email the network at lgbt@ntw.nhs.uk or follow @LGBT_CNTW on Twitter.