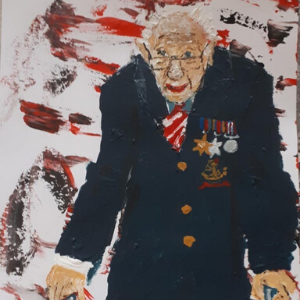 Local people have been finding creative ways during COVID-19 to support Cumbria, Northumberland, Tyne and Wear NHS Foundation Trust’s charity The SHINE Fund, which uses donations to provide the ‘little extras’ that make a big difference to people’s recovery.

Inspired by Captain Tom’s fundraising achievements, local artist Andy Parkin has created a striking acrylic artwork of the war hero walking laps of his garden, which was sold for more than £800 with proceeds benefitting The SHINE Fund.

Andy began painting several years ago, after being diagnosed with bipolar disorder. He was supported by Cumbria, Northumberland, Tyne and Wear NHS Foundation Trust (CNTW) and spent some time receiving treatment on one of the Trust’s wards. It was here that one of the staff supporting him suggested that he try drawing as a way to express his feelings.

Andy’s daughter Kate said, “Although my dad had never drawn in his life, he began to draw anyone and everyone – he would stop people in the street and need to draw them! Art became his therapy.”

Andy added, “Painting comes from the inside. It’s been quite a journey for me to get here and it’s very close to my heart. Bipolar is an awful illness but it’s given me the gift of art. Art’s given me a new lease of life.”

After his daughters shared it online the painting struck a chord with people on social media, gaining almost 50,000 ‘likes’ on Facebook. Thousands of people commented asking whether they could buy the painting, so the family decided to auction it off for charity. The winner was Vic from Leicester, who bid an amazing £820.

Andy has split the proceeds of the auction between three charities that are close to the family’s heart: a local hospice, the Alzheimer’s Society, and The SHINE Fund. 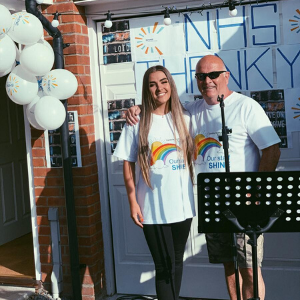 Local singer Ellie Mae McHenry has also been raising money for The SHINE Fund, with donations totalling an incredible £1282.50 following her ‘live on the drive’ concert last Friday.

Ellie Mae, who sings professionally alongside studying for her degree, had been performing an uplifting song for neighbours in Morpeth every Thursday following the 8pm ‘Clap for Carers’. She decided to build on this and perform a virtual concert via her Facebook page to raise money for the Trust.

Ellie Mae’s dad, Keith McHenry, works as a Clinical Manager at St George’s Park for the Trust, and Ellie Mae is studying to pursue a career in psychology, so the work of the Trust’s mental health teams is close to the family’s heart.

Ellie Mae said, “I didn’t expect to raise so much; I started with a target of £200, so I am blown away. From the bottom of my heart, I thank all who have supported me and who have so kindly donated.”

We’d like to say a huge ‘thank you’ to Ellie and Andy for their creative efforts in support of our charity, and to everyone who has kindly donated. Their generosity will make a big difference in helping us to support our patients and service users through this difficult time.

Money from The SHINE Fund is used to provide ‘little extras’ that make a big difference to people’s recovery and mental wellbeing. In the past it has funded day trips and activities for patients. Now, with so many people self-isolating and without visitors as per the government’s COVID-19 restrictions, the fund is focussing on providing people under the Trust’s care with craft materials, music equipment, mobile devices, games consoles, puzzles, and more to keep them happy and well throughout this difficult time.

Read more about The SHINE Fund.