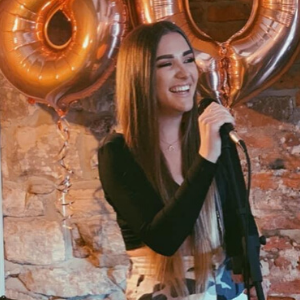 Singer Ellie Mae is fundraising for the Cumbria, Northumberland, Tyne and Wear NHS Foundation Trust Charity, known as the SHINE fund, by holding a ‘Live on the Drive’ concert from her home in Morpeth!

For the past few weeks, psychology student and professional singer Ellie Mae McHenry has been performing an uplifting song for neighbours in Morpeth every Thursday following the 8pm ‘Clap for Carers’ which has united the country.

Now she is planning a ‘Live on the Drive’ concert to raise money for the SHINE fund, the official charity of Cumbria, Northumberland, Tyne and Wear NHS Foundation Trust which provides mental health and disability services across North East of England and North Cumbria.

Money from the fund is used to provide ‘little extras’ that make a big difference to peoples’ recovery and mental wellbeing. In the past it has funded day trips and activities for patients. Now, with so many people self-isolating and without visitors as per the government’s COVID-19 restrictions, the fund is focussing on providing people under the Trust’s care with craft materials, music equipment, mobile devices, games consoles, puzzles, and more to keep them happy and well throughout this difficult time. (You can read more about the SHINE fund here.)

Before the pandemic hit the UK, Ellie Mae was studying psychology at Leeds University, as well as performing as a professional singer. She is currently back at her parents’ home in Morpeth, and wanted to keep performing to show her appreciation for the NHS and lift neighbours’ spirits.

Ellie Mae’s father, Keith McHenry, works as a Clinical Manager at St George’s Park for the Trust, and Ellie Mae is studying to pursue a career in psychology, so the work of the Trust’s mental health teams is close to the family’s heart.

The concert will be an uplifting and eclectic mix of songs – Ellie’s repertoire ranges from 1935 to the modern day, and recent Clap for Carers performances have included Over the Rainbow, Imagine, and Angel by Sarah Mclachlan.

The concert will take place from 7-9pm on Friday the 22nd May (coinciding with the end of Mental Health Awareness Week). There will be a livestream of the concert on Ellie Mae’s Facebook page.

Donations to the SHINE fund can be made via Ellie Mae’s fundraising page.