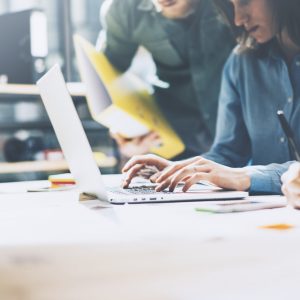 MS has been working with Cumbria, Northumberland, Tyne and Wear NHS Foundation Trust’s Individual Placement Support (IPS) service since May 2021.

She moved to the UK in 2008 and her life changed after being diagnosed with bipolar disorder the following year.
MS describes this period of her life as traumatic. “I was happy to come to England and was enthusiastic about starting a new life with my new husband, but it was a massive culture change,” she explained.

“I had this new illness and didn’t know what was happening.”

Over the next few years, MS was admitted to a psychiatric hospital many times. It is only recently that she feels confident she will not return to hospital.

A lot of that new-found confidence is down to the fact that MS now has a job. Her care coordinator recognised MS was keen to work again and referred her to the IPS service.

IPS supports people who are being treated by CNTW’s community mental health teams to find, or stay in, paid work. Since launching in 2019, the service has helped almost 200 people into jobs, ranging from nursing, to administration, construction, and everything in between. The team also help people who are struggling at work to keep their job.

The team uses a ‘place then train’ approach to helping people with severe mental health issues to find, or stay in, employment. They focus on giving each person intensive, personalised support to help them find a job that is well-suited to them. IPS staff can also liaise with employers to explain the adaptations or adjustments someone might need due to their mental health. Once someone is in work, the employer and the employee then receive ongoing support from the IPS team.

“I recognised her passion straight away,” Louise said. “I thought to myself, ‘I’ve got a star on my hands here’. MS has so much to offer, she’s bright, intelligent and experienced with a degree in science.”

Louise started to look for roles that MS would be suited to. Potential jobs ranged from a peer supporter in the NHS (someone who uses their own lived experience to help others) to a translator; MS is fluent in six community languages.

With Louise’s help, MS created a CV and was supported back into employment. She now has a full-time job at a charity and says going back to work has changed her life.

“Louise made me feel so positive,” MS said. “I was independent a long time ago, but I had lost touch with my independence. Louise made me realise that person I used to be is still inside me.

“Now, I’m earning my own money and doing my own thing. I was so happy when I got my first pay cheque.”

Louise says it’s down to MS’s hard work that she secured a job, having never missed an appointment or deadline.

“When I first met MS she was very hesitant and low in confidence after having a long time not working,” Louise said.
“I’m really proud of how far she’s come. MS is proof that people with mental issues can recover and go on to do what they want.”

MS’s home life has changed considerably too. She says her family are more supportive. “Things have improved for everyone,” she said. “I think people’s perception of you changes when you’re working. My son used to say, ‘Mummy doesn’t go to work, she stays in the house’, but now my son and husband help out more around the house.”

Louise believes there’s a role for MS in the NHS. “I think she would be great at supporting people coming into mental health services because of her lived experience.”

For MS, she wanted to share her story for others who may be going through a similar situation. She says particularly for people in her community where there is a stigma around mental health.

“I think there is still a lot of misinformation and a lack of knowledge,” she said. “I felt pressure to keep quiet and people didn’t want me to talk about my struggles. I felt I was judged if I told people I was unwell. But I want people to know it’s fine to have an illness and you are normal. Everyone has their own story.”