Ward transformed thanks to work of local artist 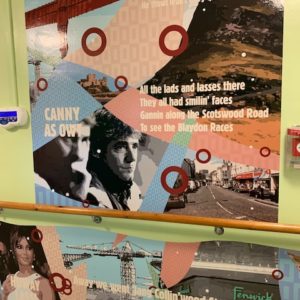 Patients at a Newcastle hospital have seen their environment transformed thanks to the work of a local artist.

Staff and patients alike at Castleside Unit, based at the Campus of Ageing and Vitality, are enjoying their recently-revamped ward which has been decorated with murals as part of a 12-month project to improve the ward environment and provide more visual stimulation for people with dementia.

Part of Cumbria, Northumberland, Tyne and Wear NHS Foundation Trust, Castleside is an inpatient unit for older people with health problems arising from organic disorders such as dementia.

A local artist was commissioned to design the murals that have been installed on walls along the ward corridor, which have been named ‘The North-Eastern Way’.

The designs were then made into vinyl which is hard-wearing and can be wiped clean.

Laura Gibbons, advanced practitioner, and Kelly Ann Myers, Clinical Manager at Castleside Ward, both said: “Everything was designed with our service users in mind, even down to the placement of the artwork. Hotspots like fire exits were identified and the artwork has been positioned to distract the eye away.

“As well as a method of distraction, the artwork can be used therapeutically as a way for patients to reminisce which can stimulate interest and discussion. The response has been amazing so far and patients have been really engaging with the artwork.”

The artwork depicts local scenes and historical landmarks including photos taken from the 1940s to the 1990s designed to reflect the varying ages of the patients.

North East sports personalities and other famous faces can be seen such as Sting, Ant and Dec, Bobby Robson and Catherine Cookson.

The innovative designs were put together following meetings with the artist and discussion groups with staff and patients. It also includes local sayings and song lyrics with different patterns and textures to stimulate those with advanced dementia who can no longer recognise images. 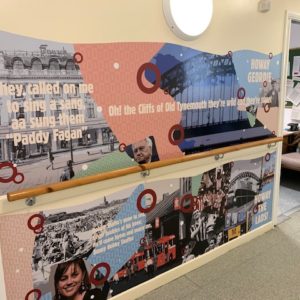 One gentlemen said: “I like the picture of the miner as it reminds me of when I was a young man.

“I enjoy looking at the mural when walking down the corridors as it brings back memories.”

Staff say he was also able to name most of the celebrities on the wall, including Cassius Clay aka Mohammed Ali. 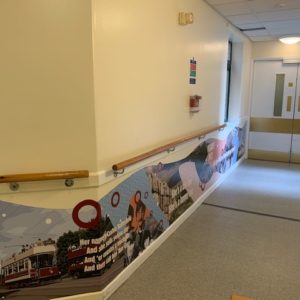 Another gentlemen was able to recall the names of the footballers shown on the walls, picking out and naming Bobby Robson. He says he remembers the days when Newcastle United and England were better.

Each mural, which was made possible thanks to charitable funds, will have information boards next to it so both staff and patients can learn about the subjects. Staff on the ward are in the process of designing training materials around the best way for patients to enjoy the artwork.

Cumbria, Northumberland, Tyne and Wear NHS Foundation Trust is a provider of mental health and learning disability services in the North East and north Cumbria.