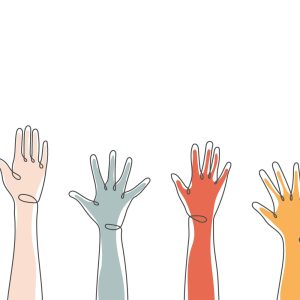 After experiencing his own issues with mental health, he volunteers to help others in a similar situation.

Richard was born in Glasgow, the youngest of five children. He had a physically violent father and a mother with mental health issues of her own.

He recalls the only times he had touched his mother or father was with a handshake on Christmas Day, there was no hugging or affection in their household.

At age 14, Richard ran away from home spending a few lost years before returning at 17 and joining the army.

“I took to the army like a duck to water,” Richard said. “I was used to discipline and was very athletic.”

He was 18 when he went first went into combat, losing many friends in Northern Ireland. He had one friend bleed to death on him, something he still has nightmares about.

After six years in the army, Richard left with an exemplary record. He worked a number of jobs, living in Germany and Canada.

“I wasn’t a very fair person then,” Richard explained. “I was always looking for something I didn’t have. If someone showed me some attention, I would leave and push them away because I couldn’t understand why someone would want to pay me any attention.”

Richard was working between jobs when he found out his mother had cancer. He hadn’t seen his family for years at this point.

“I couldn’t face my mother dying. I was this big, tough solider who’d faced some really traumatic things, but I couldn’t deal with the thought of my mother not being there,” he said.

Richard was working offshore when he got the call to say his mother was dying. He returned home as quickly as he could but missed her death by ten minutes, something which has haunted him.

“I regret I didn’t get to say goodbye or apologise,” he said.

Richard had been bottling up his feelings for a long time. It wasn’t until his mother’s funeral that he confronted his feelings and experienced his first panic attack.

Richard was grieving but was struggling to understand how he felt. Things were getting worse, and he began to have flashbacks.

“I could smell burning hair and would wet the bed and wake up sweating,” he explained.

Being from a family where you didn’t ask for help or talk about mental health, Richard thought he would be able to deal with what he was going through by himself.

“I tried to deal with my issues myself, but it wasn’t working. I thought I can either call it a day now or give life one more go and ask for help.”

After years of struggling, Richard sought help and ended up as an inpatient at St George’s Park.

It was thanks to the nurses on the ward, who Richard described as ‘fantastic’, that he got back in touch with his family after 20 years.

Life started to pick up again. He was speaking to his family and he did a degree in English Literature and Dramatic Art at the University of Bristol. His mother was a teacher and had always wanted Richard to go back into education.

He then decided to volunteer and did a peer support course, learning how to use his lived experience to promote hope and recovery for others.

“I didn’t know what to expect volunteering on a ward, but I found it really cathartic,” Richard said.

“I leave the building with a smile on my face.”

Richard helps service users with meaningful activities like taking them to the cinema or out for lunch. He said he would recommend volunteering to anyone.

“Volunteering has changed my life. It’s given me purpose. It’s my commitment to giving something back.

“On the ward, people’s barriers come down when they know I’ve had experiences with mental health as well. I had a point where I had no hope and now, I want to share my hope to others.”