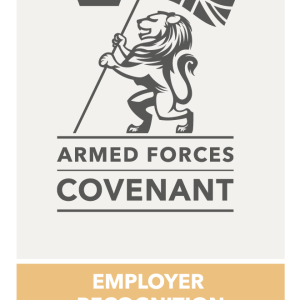 Cumbria, Northumberland, Tyne and Wear NHS Foundation Trust (CNTW) has gained an award in recognition of its support to the Armed Forces.

The Trust is one of 10 organisations to receive a Gold Award from the MOD’s Employer Recognition Scheme, which publicly recognises employers’ efforts to support defence personnel issues and encouraging others to do the same.

David Muir, Group Director at Cumbria, Northumberland, Tyne and Wear NHS Foundation Trust, said: “We are honoured to be given this recognition, which is testament to the hard work and dedication of the teams involved.

“We value the contribution former personnel can make to our organisation. The award further demonstrates the significant work we have undertaken to improve our standards of care and support for the Armed Forces.”

The award, which is valid for five years, is one of a number of ways CNTW has demonstrated its commitment to the community.

The Trust signed the Armed Forces Covenant last year which is a promise to ensure fair treatment. The Covenant recognises that the nation has a moral obligation to members of the Armed Forces and their families, removing disadvantage and giving the Armed Forces community the same access to services as the civilian community.

Signing the covenant shows the Trust’s recognition of the value that serving personnel, reservists, veterans and military families bring to the organisation.

The Trust has also recently been reaccredited as a Veteran Aware Trust by the Veterans Covenant Healthcare Alliance. This is in recognition of CNTW’s dedication to improving NHS care for veterans, reservists, members of the armed forces and their families.

CNTW is a leading provider of mental health and disability services in the North East and north Cumbria. It providers specialist mental health services for former armed services personnel experiencing severe mental health problems. If you, or someone you know, is an armed forces veteran and struggling with their mental health, expert help is available. Speak to your GP or contact the NHS Veterans’ Transition Intervention and Liaison Service (TILS) on 0303 123 1145 or email vwals@nhs.net