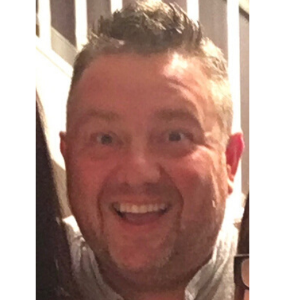 To our CNTW (and wider NHS) family

It is with a heavy heart that I must let you know that we have lost one of our own.

Steven Pearson, a community practitioner within our North of Tyne Street Triage Team sadly passed away on Monday 13 April after testing positive for COVID-19.

Steven is survived by his wife Anne, and their two daughters, Rebecca, 26 and Bethany, 20.

He dedicated his life to mental health and served the Trust for over 30 years.  Steven joined the street triage team in 2014 and was chosen for this role because of his character, experience and knowledge of mental health nursing.

Steven’s line manager Claire Witten pays this tribute:  “Our team is a team of nurses and police officers delivering urgent mental health care across the CNTW locality, and Steven became known as a highly respected member of the team with a larger than life personality. A committed member of the team, he loved his job and the team, always making us laugh and he was renowned for his wicked sense of humour.  Steven’s life was his family and he would tell us about his plans for holidays with his wife Anne and the girls, he loved Bali and was planning to travel there again this year.  His family were his life and Steven was always vocal about this when at work, he lived for his family and his work.”

Never one to complain, Steven worked tirelessly when on duty, always going out of his way to give the best possible care to those in mental health crisis.

Claire adds: “He became known within Northumbria Police as a valued member of the team, often called upon for advice by officers due to his vast knowledge of mental health care.  A kind and caring nurse who carried on until the end, despite not feeling well, we came to learn over the past few days, but a reflection of his compassion and determination to look after others in need. The team are truly devastated to lose a colleague and a friend.  We know our team will never be the same again without him and we will miss him dearly.”

Steven’s colleagues at Northumbria Police have also paid tribute.  Chief Constable Winton Keenen said “Steven was an established and hugely well respected member of the extended Northumbria Police family and our thoughts, sympathies and very best wishes go to his wife Anne, daughters Rebecca and Bethany, his family and friends at this saddest of times.”

I have spoken personally to Steven’s wife, Anne, to pass on our condolences.  Anne is also a member of our CNTW family and works at St George’s Park.   I was struck by Anne’s incredible bravery as she tries her best to support her daughters.  Anne is a very special, warm and brave lady.

Despite her grief, Anne has an important message for us all, which is the importance of following the guidance and staying at home where possible, or if this isn’t possible, ensuring that we adhere to social distancing.

Steven’s youngest daughter Bethany is currently being featured on BBC news after an interview about her father. Bethany is a remarkable young lady and you can watch her emotional interview here.

During these incredibly difficult times for the Pearson family, and those who knew and loved Steven in our CNTW family, I hope that you may take some solace that when you think of Steven, you think of the pride he took in his work and the difference that he made to others, each and every day.  Steven, you were the best of us.  Thank you.