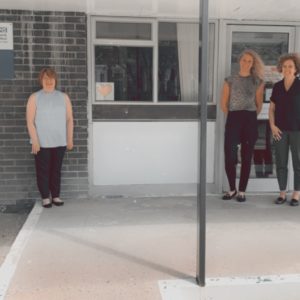 A member of staff who was redeployed has since secured a job in the team she was moved to.

Kim Carter was working as a clinical nurse lead on an inpatient ward part of Cumbria, Northumberland, Tyne and Wear NHS Foundation Trust (CNTW), when she was told she was going to be redeployed to help with the COVID-19 effort.

“When I was told I was going to be moved I couldn’t believe it,” Kim admitted.

“I felt totally gutted. I had not long returned from sick leave due to stress and felt it couldn’t have come at a worse time. The night before I didn’t sleep well at all and felt physically sick.”

Kim started on the older adults Crisis Resolution and Home Treatment Team (CRHT) in the beginning of May, feeling nervous and anxious. She was one of six members of staff asked to join the newly formed team. All CRHTs nationally were asked to form to become ‘universal’ crisis teams as a result of the pandemic.

Nurse consultant Helen House said: “We were really excited to get the Older Adults team up and running but we were also nervous because of the challenge of having to set it up in such a short timescale. Staff had to come in, learn the ropes and be ‘crisis ready’ in two weeks.”

Helen greeted Kim on her first day and helped put her at ease. Kim added: “I explained my anxieties to Helen and the fact that although I wasn’t happy to be redeployed, I would ensure this didn’t affect my professionalism.”

Kim spent her first day shadowing clinicians to gain a better understanding of the team and its role. The team offers assessment and home treatment for people experiencing a mental health crisis, as an alternative to hospital admission.

From day one, Kim says she was made to feel like part of the team, able to share her knowledge of working in inpatient services. Following the success of her redeployment, Kim has now secured a permanent role as a crisis clinician in the team.

“I’m really excited to be part of a team which I know is very much needed to support patients and prevent hospital admissions,” Kim said.

“I’m looking forward to supporting those who would normally have been admitted to hospital because there were no services available to prevent this. I feel like I’ll really be able to make a difference.”

Kim feels her new role will be significantly different to where she used to work, which was an inpatient ward providing assessment and treatment to older people with mental health problems arising from disorders such as depression, anxiety or psychosis.

Her role in the crisis team will involve working more collaboratively with service users and their families and carers. “In my old role I did a lot of audits but often felt that my skills and time would be better suited to supporting service users and families more directly. A lot of admissions are due to the deterioration of someone’s mental health but also the strain and stress this can place on those around them. My whole ethos is about person-centred nursing and supporting families.”

Helen added: “When I met Kim on her first day she was visibly anxious and hesitant about going in. The next day she was back with a massive smile on her face and by the end of the first week she was asking support for interview techniques as she wanted to apply for a permanent role within the team.

“She told me she had felt a renewed love for nursing and it was clear Kim’s heart and energy was very much driven by her desire to support the most vulnerable people. We are delighted to have Kim on board and thrilled that we get to keep her!”