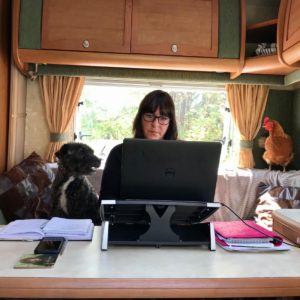 A member of staff from Cumbria, Northumberland, Tyne and Wear NHS Foundation Trust (CNTW) has found an unusual way of working from home during the Covid-19 pandemic.

Community practitioner Debbie Ash has been working from her camper van parked at the front of her house. Swapping her colleagues for chickens and a dog on her farm, Debbie usually works in the Personality Disorder Hub at Benfield House, Walkergate Park, working with people who experience complex emotional needs and relationship difficulties.

When the pandemic hit, Debbie was shielding for health reasons and after a week of working from home she realised that she needed to have a proper work station that she felt she could leave at the end of the day.

“I call the first week of working from home the honeymoon period,” Debbie explained. “I didn’t have to do a commute, there was no sitting in traffic and I could sit and work from my recliner chair.”

By the second week, the novelty had started to wear off. “I began to realise the importance of rest, it’s very easy to not take any breaks when you’re working from home but it’s vital to stop between meetings when you can.”

That’s when she decided to bring the camper van to the outside of her house on the farm.

Working from home has not been without its challenges. Debbie says a difficult thing is trying to keep a straight face on a video call when the chickens have made their way into the camper van.

Guilt has become a common feeling for Debbie during the pandemic, which she feels a lot of people who have been working from home will be able to relate to.

“I’ve felt guilty because I can work from home when others can’t and the fact my friends and colleagues are working on the frontline,” Debbie explained.

“I often feel guilty for my privilege – I have space and a garden and the ability to go on walks. I don’t have the added pressure of children at home that need home-schooling. You sometimes feel that you’re not doing enough.”

While there has been challenges, there has also been positives. Lockdown has allowed time for reflection and her dog now responds to ‘Office Boy’ rather than his real name.

Debbie said she wouldn’t have managed without the unfailing support of her colleagues, managers and from IT who have been on hand to sort out any connection issues in the camper van.

“My colleagues and the wellbeing tools and advice from the Trust have been really helpful. I appreciate I’m very lucky and this journey has been easier for me than many others.”