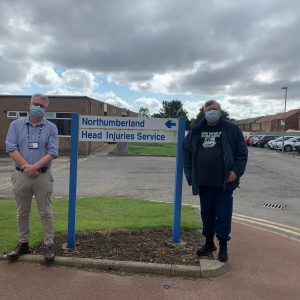 A Northumberland man has raised money for the head injury service that helped him rebuild his life after a mountain bike accident.

In 2013, David was referred to the service again after becoming anxious and stressed at work. Often people who have suffered a head injury have issues with decision making and problem solving which can make work life difficult.

Now well on his way to recovery, David wanted to give something back. “Since leaving hospital I’ve had so much support from so many different groups, I thought I should put something back in the system,” he explained.

David is raising money for the service after friend Darren J Holloway suggested releasing an eight-track cassette from his band SINNEN, part of the TQN-aut music label David runs with label partner Andy Wood. All proceeds from the sale of the cassette will go to the NHIS and David has agreed to personally match the amount made.

The money will go towards the purchase of equipment which will enable the service to provide a nurse-led clinic to head injury survivors.

Last year, the service’s criteria changed to support people of any age, whereas previously it was for working age adults only. This has led to an increase in referrals of older people with brain injuries.

Head of Northumberland Head Injuries Service, Neil Brownlee, said: “At the moment we have a consultant-led clinic one day per week, however with the increase in referrals for older people, who may have a number of heath care needs in addition to brain injury, we believe that the development of a new nurse-led clinic will prove invaluable.”

The money the TQN-aut label raises will help fund the equipment needed to set up the clinic.

Neil added: “It’s incredible that David has decided to do this. Working in the NHS, you get to see the progress someone makes and the difference you can make to their lives. If a service user gets to a stage in their recovery where they feel they can help make a difference as well, it’s like a double result.

David was keen to fundraise for the NHIS after they helped increase both his confidence and independence.

“I had started to become house bound and my house was my comfort zone,” he said. “I worked with an occupational therapist to help me get back into the community, getting on the bus, going to the shops, going back to work.

“I know that any time I have an issue I can go to the service, it’s not a closed door but a revolving one. I thought if I can raise money and help others make progress the way I have then it’s worth it.”

David has always had a passion for music and set up Northumberland label TQN-aut when he came out of hospital. Through the label, David and business partner Andy have a commitment to supporting health services and an inclusive culture, believing everyone should be supported in music.

Part of Cumbria, Northumberland, Tyne and Wear NHS Foundation Trust (CNTW), Northumberland Head Injuries Service offers a range of services for people who have sustained a traumatic brain injury, including rehabilitation and social care. The service is available to residents from Northumberland aged 16 and over.

For more information and to buy the cassette, go to https://tqn-aut.bandcamp.com/album/sxmtl

More about the label:

Since their unconnected inception in 2017, TQ (zine – Andy Wood) and N-Aut (tapes – David Howcroft) have been actively supporting each other in their work and developing the synergy of both enterprises. Meeting in Newcastle once a month to share ideas and plans, it was decided to make real an idea that had been discussed on many occasions.

With TQ zine offering free CD’s to subscribers, and with both Andy and David on occasion helping with the funding of such, in May 2019 the idea of the TQN-Aut label became a reality.

David and Andy have a strong desire to: