Richard’s steps from the armed forces to an NHS career 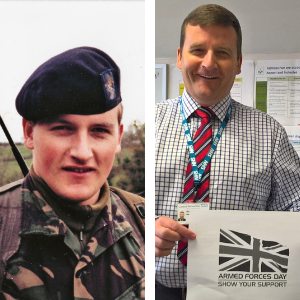 After serving a full career in the British Army, Richard Lloyd transitioned to civilian life by taking part in the Step into Health programme, which provides a dedicated pathway into a career in the NHS. Richard has worked for several NHS organisations since leaving the armed forces. He is currently Head of Business Development and Finance for North Cumbria at Cumbria, Northumberland, Tyne and Wear NHS Foundation Trust (CNTW), a leading provider of mental health and disability services across the North of England. Here, Richard shares his experiences of stepping into the NHS.

“I served in the Army for 28 years. I joined as a private soldier and was promoted several times, before being commissioned from the ranks to become an Officer. I was fortunate to enjoy a varied, demanding and fulfilling career, and honoured to command soldiers on operations in Northern Ireland, Bosnia and Iraq.

“When I left the Army in 2012, I moved to the Lake District in Cumbria to set up a small family business, which I’m pleased to say was successful and profitable. However, after four years I was missing being part of a large service team. I didn’t feel I was making full use of the qualifications and experience I had gained during my military career.

“I saw Step into Health advertised on the Officers Association website and joined an online webinar to find out more. From the very beginning I knew that I wanted to get involved. I then attended an information day at Northumbria Healthcare NHS Foundation Trust, and left feeling that the NHS offered an exciting opportunity for a worthwhile second career.

The NHS offers a really rewarding second career for veterans. People value the teamwork and selfless commitment that ex-forces staff can bring, and my willingness to constructively question issues or propose improvements is welcomed by colleagues.

Richard LloydHead of Business Development and Finance for North Cumbria

“After attending the insight day, a two-week work placement was organised for me, also at Northumbria Healthcare NHS Foundation Trust. I experienced first-hand the work of NHS managers and explored how the Trust delivered its services to patients. The support I received was fantastic. Attitudes towards the military were great, and I came away convinced that a career in the NHS was something I wanted to pursue.

“Later that year I successfully applied for the post of Business Manager with Cumbria Partnership NHS Trust, and my NHS career began.

“I am extremely happy with my move to the NHS, and my family has benefitted from the stability and career potential that it offers.

“In March 2020 I joined CNTW as Head of Business Development and Finance in North Cumbria. I was attracted by the job specification, which I thought suited my skill set and experience. I’d also heard really positive things about CNTW from contacts and former colleagues.

“Working in the field of mental health has been a real learning curve for me, but one which I’ve found invigorating and enjoyable. My colleagues are very supportive, and the culture within CNTW is hugely positive and progressive.

“I hope that my impact has been a positive one, and I feel valued and respected within my team. My role is demanding but diverse, concerned with business plans, financial performance, contracts and efficiencies – so I find myself involved in a wide range of projects.

“The NHS offers a really rewarding second career for veterans. People value the teamwork and selfless commitment that ex-forces staff can bring, and my willingness to constructively question issues or propose improvements is welcomed by colleagues.

“My abilities to analyse, prioritise, formulate plans and communicate effectively, which I gained during my career in the armed forces, are vital to my role. I also bring a breadth of experience, personal resilience and fresh eyes.

“There are excellent opportunities for development, training, and promotion in the NHS. You don’t need to have a clinical background; there is such a wide range of roles and services. The civilian qualifications I gained towards the end of my Army career, in particular my MBA (Master of Business Administration) and PRINCE2 project management qualification, have opened up lots of opportunities.

“Although I am less than 5 years into my new career, I very much hope to tackle many more new challenges and roles within the NHS.

“I am delighted that we have recently set up a Staff Network for Armed Forces and Veterans at CNTW. I hope that it can be a beacon for military-related issues and events, and support our recruitment of more ex-forces personnel and families into the NHS.”