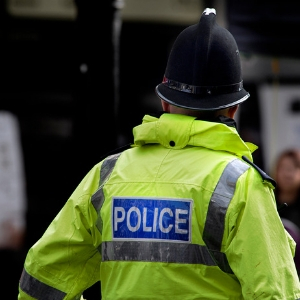 A popular police officer has been honoured for his work in mental health.

PC James Desmond the Hospital Liaison Officer with Northumberland, Tyne and Wear NHS Foundation (NTW), a provider of mental health and disability services, has been honoured with two awards.  At the recent Northumbria Police Pride in Policing awards, he was chosen by the public as the winner of the Outstanding Contribution award and the Outstanding Police Officer of the year.

He has been a constant figure around St Nicholas Hospital, where he was the first liaison officer to have a police base on site. In recent years he has also taken on the Hadrian Clinic, Campus for Ageing and Vitality, supporting both staff and patients. James has a great understanding of mental health and his personable nature makes him a role model.

James is very approachable, friendly and professional to everyone he meets.

James is due to retire later this month.


I want to start by saying that the dedication and complete professionalism of all NTW staff I’ve worked with is the biggest thing that I will take with me. Their support for some of our most vulnerable people in the North East area is something the Trust management and the local population should congratulate daily.

James said: “My role has at times been very challenging and also difficult but then also very rewarding. I also say that I don’t do anything different to the thousands of police officers up and down the country but Northumbria Police and Insp Steve Baker need to be congratulated for allowing me time and support in assisting the Trust, patients, their families and all the staff which I have massively enjoyed for the last 10 years.

“I would also like to mention one member of NTW staff, Claire Andre, Clinical Police Liaison Lead. Thank you for being a massive support and friend, in making NTW and Northumbria Police a beacon throughout the UK for what can be achieved through mental health and police partnership work. Most of all I wish to say thank you and wish everyone, patients and staff, good mental health.”

Gateshead Neighbourhood Insp Alan Pitchford who has known James for 20 years, said: “James is due to retire in October and I have the unenviable task of trying to replace him. His work at the hospital often goes under the radar but his contribution is frankly huge, having kept some very vulnerable people safe.  He does all of this with a smile on his face and that is indeed a measure of the man.”

Everyone at NTW who knows James, wish him a very happy retirement from the Force. You will be missed by all.