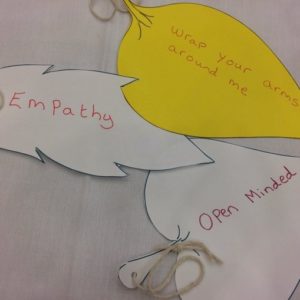 Actively working and sharing information with the people who come into contact with our services is vital. The Service User and Carer Reference Group is a forum for people to support the development of our existing services and to discuss any plans for changes. Although facilitated by the Trust’s Involvement team, the sessions are led by service users and carers, and the most recent session on 31 October was co-chaired by service user David Dougal.

This was the first meeting of the group since mental health and learning disability services in North Cumbria transferred to our Trust and we became Cumbria, Northumberland, Tyne and Wear NHS Foundation Trust on 1 October. The group were delighted to welcome several service users, carers and voluntary sector groups from the area.

Several people also commented on how encouraging it was to see many younger people present. The attendees were a really diverse mix, which is so important in making sure a range of views are heard. There was a wonderful atmosphere in the room with people mingling, meeting new people and warm greetings between friends and acquaintances.

I attended this group meeting for the first time. At first I was a little apprehensive, not knowing what to expect fully. I’m so glad I attended. The speakers were informative and very inspiring, especially the guest speakers speaking from experience of their condition.

The first presentation of the day was from a man who used PowerPoint – as well as his great sense of comic timing! – to illuminate some of the challenges he faces since developing dysarthric speech (a speech disorder caused by muscle weakness) following a motorcycle accident.

Although the presentation had a lot of humour throughout, the presenter made some powerful points about how his condition can isolate and frustrate him. The audience really appreciated his honesty and the advice he gave on how to communicate with him. His message was that it’s important throughout life to focus on learning from our mistakes, and to listen carefully even when things are challenging.

James Duncan, Deputy Chief Executive at CNTW, then gave a short presentation about the Trust’s long term delivery plan. He focussed on the need to open up and work with people at a grass-roots level by listening and adapting during these difficult times, resisting the urge to lead from the top down which the NHS and other organisations can often default to when the going gets tough.

James then invited each table to discuss some key questions and record some feedback to inform long-term planning at the Trust. The room came alive with dozens of discussions, everyone sharing their unique point of view and learning from each other with a positive attitude.

After lunch, another service user shared his story. It was an insightful, and very moving, exploration of the often misunderstood diagnosis of Emotionally Unstable Personality Disorder, which he is working hard to educate people about. The group were left feeling very inspired by his journey; despite having gone through many dark times, he now works as a Peer Support Worker for the Trust, helping others to find hope.

Following this, a member of the Trust’s research team asked for the group’s input on a leaflet being produced to give people more information on what they do. This led to some useful improvements being made to the wording of the leaflet, making sure it was clear and easily understood by all. There was also an opportunity for attendees to ask questions and learn more about how people can get involved in research.

Finally, a meeting was held between the service users, carers and volunteers from North Cumbria with Margaret Adams, Co-Chair of the Group and the Involvement Team to discuss how Involvement will move forward in their area.  The new members of the Group expressed how hopeful and positive about the future the day had made them feel.

You can also follow the Involvement team on Twitter at @InvolvementCNTW to keep up with their latest news.