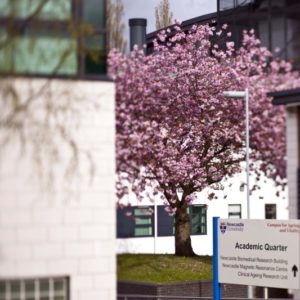 Staff at NTW have been closely involved with a new report from the Royal College of Psychiatrists (RCPsych) which sets out recommendations for providing good quality services for people living with young-onset dementia (YOD).

The report was published in October 2018 and is endorsed by RCPsych, Alzheimer’s Society, Young Dementia Network and the Royal College of General Practitioners. Its production involved wide collaboration between psychiatrists, GPs, neurologists, dementia researchers and patients living with YOD.

The RCPsych report’s recommendations for NHS Trusts include putting the patient with YOD and their family at the centre of the service, providing a specialised service for YOD with expertise in offering assessment and treatment alongside support, and actively supporting YOD research.

Dedicated, specialist services for people diagnosed with young-onset dementia are still the exception rather than the rule. We should, therefore, be incredibly proud that NTW has a team in Newcastle to support people living with YOD.

When people think about dementia they often don’t realise it can affect younger people. The new college report is fantastic as it advises organisations how best to provide services for people living with YOD.

The needs of people with YOD are often very different from those diagnosed with dementia in later life.  A different approach is often required and so a specialist team is recommended for this reason.

Dementia is the name for a varied collection of symptoms that suggest a person’s brain is struggling to do all the tasks it usually does in everyday life. Every person with dementia is different but things such as a person’s memory, co-ordination or personality can all be affected.

YOD can be caused by similar diseases as dementia in later life such as Alzheimer’s disease and vascular dementia. However, rarer forms of dementia are more common in patients with YOD.

NTW offers a dedicated community-based service working with people under 65 with a diagnosis of certain types of dementia. The team was set up in 1997 and is one of the first services in the country to specifically focus on working with people living with YOD.

The YOD team is based at the Campus for Ageing and Vitality (formally Newcastle General). Dr McKirdy works with a dedicated community psychiatric nurse (CPN) and a senior trainee psychiatrist with additional input from occupational therapists, psychologists and support workers.

The support available for people living with YOD can include counselling and information to develop strategies to help maintain their mental health, support and education from other professionals including social workers, district nurses, voluntary services or day centres, as well as practical measures such as advice about benefits and household budgeting.

The needs of a younger person when receiving a diagnosis of dementia are different to those of an older person. The impact of the diagnosis can be much greater.  The person may still be working with financial commitments such as paying a mortgage. There may also be young children to support and dependant parents.

Families in the past have said the support from the Younger Persons team was crucial and key to adjusting to a dementia diagnosis and allowing the person and family to live a “normal” life and continue to function with the appropriate support signposted by the team. The knowledge of the available pathways for the person and the team liaising with other agencies has allowed timely and appropriate interventions.

Many of the report’s detailed recommendations are already in place at NTW such as offering a specialist service for YOD where the patient is at the centre of the team, playing an active role within a local clinical network (which includes neurology, neuropsychiatry and genetics) and collaborating with local research networks.

If you are concerned about your memory it is recommended that you speak to your GP in the first instance who will work with you to address your concerns.

The full RCPsych guidelines on Young Onset Dementia can be accessed via the RCPsych website.

Support in Newcastle is also available from the Dementia Advice Centre