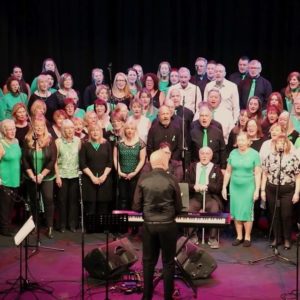 A North East community choir are holding a special concert themed around mental health this June in aid of a North East NHS Trust’s charity.

The Sing United choir performs their new concert “Always On My Mind” on Sunday 16 June from 6pm at the People’s Theatre in Heaton in Newcastle.

The concert features Sing United’s 150-strong choir as well as a five-piece band led by the choir’s Musical Director Mark Deeks, and will be supporting the SHINE fund, a charity which supports service users receiving care from Northumberland, Tyne and Wear NHS Foundation Trust (NTW).

Musicians have long been able to use their songs as an outlet for their feelings and their struggles, and in turn these songs have often become a musical part of a support network for fans across the world.

We’re really pleased to be supporting the SHINE fund with our latest concert, and hope that by doing so we can contribute to raising awareness of mental health issues.

We are hugely grateful to Sing United for supporting the SHINE fund in their latest concert. By supporting SHINE the choir will help our Trust provide ‘little extras’ for our service users – therapeutic activities or items of comfort which will enhance people’s care and help towards them living a happier, fuller life.

The songs being performed include Swedish musician Avicii’s iconic anthem “Wake Me Up”, while contributions from America such as Green Day and James Taylor will deal with personal stories of the difficulties of coping with grief.

There will also be classic songs including Don McLean‘s tribute to the mental struggles of Van Gogh (“Vincent”) and the iconic “Don’t Give Up” by Peter Gabriel and Kate Bush, while the North East will be represented on the bill by Geordie singer-songwriter Simma‘s ode to dealing with depression, “Black Dog”.

Sing United will also be creating a “unique musical mental health time capsule” especially for the concert involving both their own singers and members of the public.

NTW provides mental health and disability services across the North East of England. The Trust’s SHINE fund supports people receiving disability or mental health care by providing ‘little extras’ which are not covered by central funding but can make a real difference.

You can find out more about the SHINE fund at www.ntw.nhs.uk/about/charitable-funds

Based in Newcastle, community choir Sing United aims to capture the positive potential of people and music by bringing people together who love to sing in a fun environment. Every term Sing United choose a different charity or cause for their concerts to support. Every project also features music and messages made in or about the North East.

Find out more about Sing United at www.singunited.co.uk

Tickets are now on sale for the Sunday 16 June concert at https://thelittleboxoffice.com/singunited– tickets cost £14 and concessions (under 16s & over 65s) are £10. The concert takes place at The People’s Theatre on Stephenson Road, Heaton, Newcastle upon Tyne, NE6 5QF.

Sing United are also performing a short, free pop up concert in the entrance foyer of St George’s Park Hospital, Morpeth, NE61 2NU, on Wednesday 12 June from 6pm-6.30pm. The St George’s Park concert is open to anyone who would like to come along, and refreshments will be available, together with a raffle and tombola.