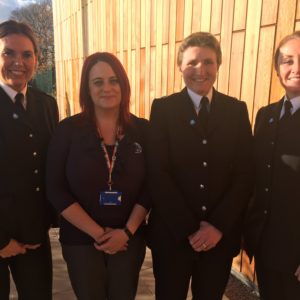 A north east nurse has been commended for raising awareness of policing and mental health.

Claire, who goes by @LovelyClaireyA, has a number of followers including, Police officers and staff from across the country and the world, as well as mental health professionals and members of the public. She tweets about partnership working in mental health and is passionate about the mental health of Police and breaking down stigma so officers feel able to speak out and know where to ask for help.

Although not a winner on this occasion, Claire said: “This was an incredible honour for me, to be at the event as non-police and be part of the ceremony, witnessing the recognition and engagement of Police with communities nationwide. It was fabulous to finally meet so many people I engage with frequently on Twitter and put faces to names”.

The Twitter awards, a not for profit scheme set up by a member of the public, have been running since 2011. Nominations are received by members of the public and measured against a number of criteria such as specific feedback about each account, the nominations received and, most importantly, the value to the public of the account.

This year’s awards, hosted by West Yorkshire Police, took place on Friday, 24 November. The overall winner is invited to attend the SMILE conference in Miami, a conference devoted to social media, the internet and law enforcement initiatives.