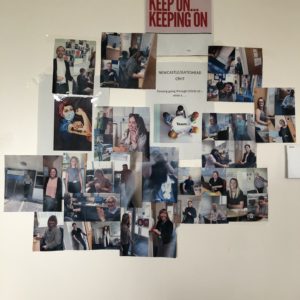 The Newcastle and Gateshead Crisis Resolution and Home Treatment Team (CRHT) has received national accreditation, despite only merging as a team last year.

The team has been accredited by the Home Treatment Accreditation Scheme (HTAS), an award from the Royal College of Psychiatrists which recognises crisis teams that meet the highest standards.

Formed in April 2019, Newcastle and Gateshead CRHT is now one of 23 crisis teams that have been awarded the accreditation. Part of Cumbria, Northumberland, Tyne and Wear NHS Foundation Trust (CNTW), the team operates 24/7, offering assessment and home treatment for people over 16 experiencing a mental health crisis, as an alternative to hospital admission.

Helen House, nurse consultant for the service, said: “The old teams were accredited but when the teams merged together we had to apply for new accreditation. This accreditation is testament to the hard work and dedication of our staff. When we merged there wasn’t time to stop or get to know each other, we had to hit the ground running.

“The team have been exceptional and many people who visit the service say you wouldn’t think we were so new. I think the reason it has worked so well is because we all have a common goal – we want to help those who need it most.”

Over a six-month period the team had to gather evidence for accreditation which looked at all aspects of the service, from service provision and structure, and working with other teams, to staff training, discharge planning and support for patients’ families and carers.

Representatives from the Royal College of Psychiatrists and peer reviewers from other crisis teams visited the service, speaking to staff, service users and carers. They also spoke to other services that work alongside the team who find them to be both “friendly” and “supportive”.

One of the things that stood out most from the report was feedback from service users and carers, both in terms of how staff communicate and listen to them, as well as their overall experience of the service.

“The team were absolutely fantastic. They responded to everything I needed, they deserve a medal.”

“They actually care and listened to everything I had to say.”

“Every time I leave, I feel a little bit better.”

“I wouldn’t be here if it weren’t for them.”

“This is the first time my son and myself have used this service and it is outstanding. Every single member of the team is caring supportive, helpful and obviously so dedicated. It is a vital life supporting service that we could not have done without. Thank you so much to this team for their support in what has been an extremely bad time. I finally feel that my son is getting the help he needs and they have given us hope for the future.”

The report found that the majority of service users felt they were involved in shared decision-making about their mental and physical care, treatment and discharge planning. All service users and carers spoken to said they had been treated with compassion, dignity and respect.

“Every member of the team has treated me with dignity and respect and ensured that my needs as a carer have been met. The communication has been outstanding in every respect, both in my son’s care and mine. We both feel that we can trust the decisions made by the team for my son’s continuing care.”

The report also commented on an emphasis on staff wellbeing, describing the team as a “cohesive, honest and supportive group”.

Helen House added: “Nobody works in the crisis team for an easy life. We believe in the work we do and want to support people as best we can. The whole team is delighted with the accreditation as it gives us validation for the work we do. It’s especially great for morale during this time.

“It’s also great for the team nationally, as it shows we are among the best crisis teams in the country.”

The Home Treatment Accreditation Scheme was established to support in the quality improvement of crisis resolution and home treatment teams. Its aim is that people who are experiencing a mental health crisis and their family or carers receive high quality care, with fair access for all.