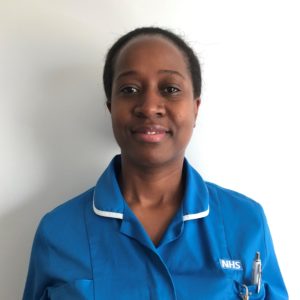 The Cultural Ambassador Programme, launched by the Royal College of Nursing, aims to support staff from a BAME (black, Asian and minority ethnic) background in formal processes such as disciplinary hearings.

We spoke to nurse Christine Ntanda, one of the Trust’s Cultural Ambassadors, to find out what the role entails.

I found out about the Cultural Ambassador role through associate medical director and consultant psychiatrist, Dr Patrick Keown, who works on the ward where I am a nurse. He sent me the information from the Royal College of Nursing and after a quick read I knew straight away it was something I wanted to be involved in.

Once I had registered my interest the process of becoming a Cultural Ambassador was easy. There has recently been a change in criteria for who is eligible for the role. Initially it was for staff who are a Band 7 or above. However, it was found that there were not many staff from a BAME background that were at that band so the role was made open to others.

I have many reasons for wanting to become a Cultural Ambassador. The main reason being my desire to see BAME staff have a fairer experience.

Research has shown that BAME staff are more likely to be involved with disciplinary hearings and grievances than staff from other backgrounds. I wanted to become a Cultural Ambassador to help support the organisation in making crucial changes to tackle racial discrimination.

As a Cultural Ambassador I sit on investigation teams and disciplinary hearing panels. Our role is to identify any issues of conscious or unconscious bias and instances of people being treated less fairly. Cultural Ambassadors are there to look at these formal processes through a different lens, providing independent advice and guidance.

If a Cultural Ambassador sees anything that may be biased or feels that cultural factors need to be taken into account, they are able to interrupt the process and ask teams to consider these observations in the decision making process.

I think the role is an extremely important one. Cultural Ambassadors are in a position to challenge discrimination. I’m able to use my skills and training to ask open and honest questions on both sides.

The Cultural Ambassador training gives a clear understanding of individual cultural needs and nuances as well as knowledge of conscious and unconscious biases. This enables us to pose questions that others may not have considered and often, this has prevented proceedings from going further than necessary.

Cultural Ambassadors are given a lot of support from the Royal College of Nursing’s regional officers. We receive further training on formal employment relations processes and have the opportunity to shadow HR staff with grievances and disciplinary processes.

I would definitely recommend being a Cultural Ambassador. The training equips you with skills and knowledge around cultural awareness and also helps with your own individual development. You get an in-depth understanding of the ‘little differences’ in cultures and how important it is to consider them.

The learning and development offers a rare opportunity to understand both the complexities and subtleties of tackling discrimination in the workplace. Becoming a Cultural Ambassador has allowed me to influence change in a positive way.