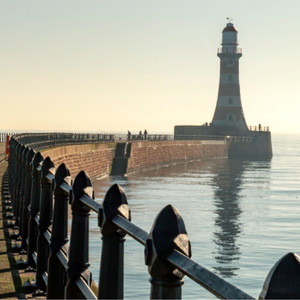 Kath (not her real name) referred herself to the Sunderland Psychological Wellbeing Service for help in January this year, after the sudden loss of a family member brought years of mental health struggles to a head.

She describes the loss of her family member as the ‘catalyst’ for things unravelling, saying her mental health struggles had been on a ‘slow boil’ for years. “I’d always kind of lived with a level of probably unhealthy anxiety, but I’d always been able to manage it so it didn’t interfere too much.

“To everyone else I was the person that you came to, to fix problems. I hid it very well. I was struggling and even my closest friends didn’t know that all this was brewing under the surface.”

I couldn’t bear the thought of leaving the house in case something bad happened.

But after her bereavement, Kath found her anxiety levels overwhelming her. “My worries about the kids ramped right up, to the point where I couldn’t leave the house or go anywhere. I couldn’t bear the thought of leaving the house in case something bad happened.”

Kath realised she needed some extra help. The greater focus on staff wellbeing support at her workplace during the COVID-19 pandemic “had kind of already planted the seeds”, she explains, “that it was alright to say, ‘I’m struggling.'”

A doctor had referred her for counselling many years ago after the death of another family member, but Kath hadn’t found it very useful. This time, Kath referred herself to the Sunderland Psychological Wellbeing Service and found it a very different experience. “Because it was actually me going to the service and saying ‘I need some help – I don’t know what help I need, but I need something.’”

I’m well, for probably the first time in 30+ years.

The Sunderland Psychological Wellbeing Service team discussed Kath’s struggles with her, to understand what might help her most.

“I thought I would need bereavement counselling, but actually they helped me to see that what I was feeling about that was normal after the loss I’d experienced.

“What wasn’t ‘normal’ was the way my anxiety had reared its head and squashed me down – it just overtook everything.

“I had a really good chat with them in the initial assessment. Then when Andy [Kath’s first Psychological Wellbeing Practitioner] first called, I sat for about an hour and a half talking to him and literally spilling my guts. And he was like, ‘Right, I know what we need to do with you, let’s get started and get you well again.’

The plan formulated with the Sunderland Psychological Wellbeing Service team was for Kath to do some talking therapy sessions with Andy, before moving on to a specific form of therapy known as Compassion-Focussed Therapy with another practitioner, Tonya.

To anyone who feels like I did before starting this journey, I’d say – you absolutely do deserve help.

Kath found this progression really helpful. “Going into it, I was very much in the frame of mind that I deserved everything bad that happened. I could be very cruel to myself. I think if I had gone straight into the Compassion-Focussed Therapy it wouldn’t have worked as well, because I wasn’t in the right frame of mind.”

Encouraging anyone else who is struggling with similar feelings that are making it difficult to seek help, Kath says: “To anyone who feels like I did before starting this journey, I’d say – you absolutely do deserve the help. Our brains can be our worst enemies a lot of the time, and tell us lies about ourselves.

“Andy’s work was all around that, and my anxiety, giving me strategies to ground me again when I felt I was losing control.”

Kath wants to remind people that seeking mental health care is just as important as physical healthcare. “If I had a broken leg, I’d get a cast – I wouldn’t limp around and let it heal badly. And that’s what has happened with me over the years. I’ve had all this trauma, and my brain has healed itself as best it can, but it left a break that hadn’t healed properly.

“Without a cast – the support – it’s not going heal properly, and that’s why people need to reach out and get support if they are having a tough time. Needing that is nothing to be ashamed of.

“I’m actually living my life properly now – and I’ve still got my anxiety on my shoulder, kind of shouting at me when things get a bit overwhelming, but I’ve got the strategies I need now to make it go quiet. It doesn’t go silent, but it quiets down so I can actually function and do the things I want to do.

“And I also know that if I do start to become unwell again, I know where to go to for extra support.”

If you live in Sunderland and want to refer yourself to the Sunderland Psychological Wellbeing Service for support, please visit www.sunderlandiapt.co.uk or call 0191 566 5454.

If you live in a different area, you can use the NHS website to find your local Psychological Wellbeing Service and seek support. (These are sometimes known as IAPT Services or Talking Therapy services.)