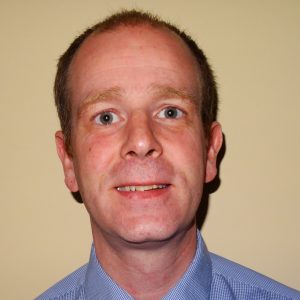 It was visiting his mother at work at Northgate Hospital that inspired nurse consultant Ian Thorpe into the profession.

Ian would regularly visit his mother who was a domestic on one of the wards before spending a year volunteering at Northgate sports centre.

“Hospitals were very different at that time,” Ian explained. “Visitors and families were encouraged to spend time there, so I felt I was already used to being around people with learning disabilities.”

As he was about to finish his A Levels, Ian realised he didn’t want to go to university and chose to start work as a nursing assistant. He qualified as a nurse in 1993 and has spent the majority of his career working in secure forensic learning disabilities services.

Having done several secondments in other areas, Ian was offered the nurse consultant post in 2015.

As a nurse consultant in Cumbria, Northumberland, Tyne and Wear NHS Foundation Trust (CNTW)’s learning disability pathway, Ian splits his role into four elements. He does clinical work with patients, a clinical leadership consultancy role, education and training, and research and development.

He is also a responsible clinician, meaning he has leadership to a group of patients detained under the Mental Health Act. A role that had previously only been available to psychiatrists, Ian is one of less than 30 mental health and learning disability nurses with this responsibility.

For Ian, the best thing about working with people with learning disabilities is being able to make a difference. “Some people have been detained for many years of their lives and working to help them get back into the community and achieve their goals is extremely rewarding.”

A time he felt he was really able to make a difference was working with a man who had been in institutional care for 50 years. “People felt he was dangerous, but we worked to help him live in the community,” Ian explained. “It’s a privilege to see people who have been institutionalised for a long time go on to live fulfilling lives.”

In his three decades in nursing, the biggest change Ian has seen is the reduction of inpatient beds as more people with learning disabilities are cared for in the community.

For those interested in a career in Learning Disability nursing, Ian says you will need compassion and patience. “Sometimes the gains are slow as people can remain in services for a long time. It’s important to know many people with learning disabilities have mental health and physical health issues as well. We try to increase a person’s independence as much as we can.”

Ian also stresses the importance of building relationships with patients. The ward has a board with each staff member’s hobbies and favourite programmes on so patients can get to know them and has even brought his pet tortoise onto the ward.