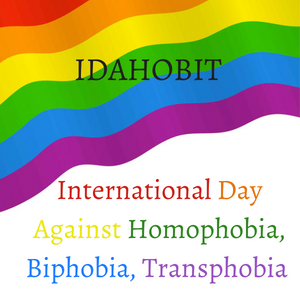 International Day Against Homophobia, Biphobia Transphobia is being observed on Thursday, 17 May 2018.

It was originally known as the International Day against Homophobia (IDAHO).

Louis Georges Tin was the founder (and acted as its Chairperson until he resigned in 2013). He created the committee to coordinate actions in different countries around the world to promote the day and to lobby for its official recognition of May 17th.

This date was chosen as it commemorates the decision to remove homosexuality from the International Classification of Diseases (ICD) of the World Health Organisation in 1990.

The day was conceived as a concept in 2004. This was following a yearlong campaign which culminated in the first ever International Day Against Homophobia.

In 2009, Transphobia was added to the name of the campaign and activities that year focussed on the violence and discrimination that trans people experience.

On the eve of May 17th 2009, France became the first country in the world to officially remove transgender from its list of mental illnesses.

Louise George Tin and two other committee members started a hunger strike in June 2012. They were urging the French President Hollande to introduce a United Nations resolution decriminalising homosexuality.

In 2015, Biphobia was added to the name of the campaign.

The main purpose of May 17 is to raise awareness of violence, discrimination, and the repression of LGBT+ communities world-wide. In turn, it provides an opportunity to engage in dialogue with the media, policy makers, public opinion and the wider civil society.

It is commemorated by public events such as large scale street marches, parades and festivals. Arts and culture events are also common.

The NTW LGBT+ Network will be providing information and conversation to bring about awareness of LGBT+ rights, violations and to stimulate an interest in LGBT+ rights worldwide. We will be outside St. Nicholas Café from 11:30 following raising the Rainbow Flag by the clock tower. We will be pleased to chat and to answer questions.