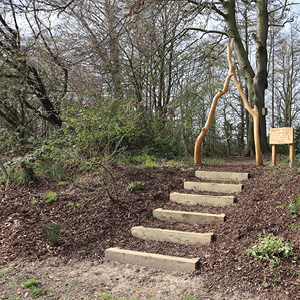 A new wooded area at a Northumberland NHS hospital has been named in honour of one of its long-serving volunteers.

The woods at Ferndene Hospital near Prudhoe have been dedicated to the memory of Peter Mantle, a former volunteer at Prudhoe Hospital and Secretary of the League of Friends of Ferndene.

Ferndene is based on the former Prudhoe Hospital site, and the League of Friends have worked for many years to raise money to fulfil patients’ wishes at both sites.

In April 2019 there was an opening ceremony held at Ferndene for the new entrance to the wooded area. The League of Friends of Ferndene attended, along with service users, staff and councillors.

At the event the League of Friends Secretary Christine Mantle, President Sylvia Hardy, and Chair Jimmy Moody were presented with flowers to say thank you for all of their hard work and dedication to Ferndene Hospital.

Peter Mantle passed away recently and the woods have been named Mantle Woods in honour of his work.

Edward Wilkinson, Specialist Activities Coordinator at Ferndene, said: “Peter Mantle sought to improve the lives of all the patients admitted to hospital. He devoted a large amount of his time to organise and manage the League of Friends fund, as well as supporting a very vulnerable population to achieve, develop and enjoy through a range of projects.

“Ferndene never had a better friend then Peter, and Mantle Woods will continue to develop. It will be a space for patients to relax and enjoy and have moments of quiet reflexion, but also have opportunities for adventure.”

Christine, Peter Mantle’s wife, said: “Peter thoroughly enjoyed his time at Prudhoe Hospital, Ferndene and latterly at the League of Friends and he continued this until he died.

“I want to thank all staff and patients for making the decision of naming the woods after my husband, I do hope they are enjoyed by all and look forward for the developments planned for Mantle Woods.”

Staff at Ferndene are hoping in the near future to develop the woods further by installing a low ropes course – a safe obstacle course with ropes, bridges and poles close to ground level. The League of Friends will also be purchasing tents for service users to enjoy camping nights in the wooded areas around Ferndene.