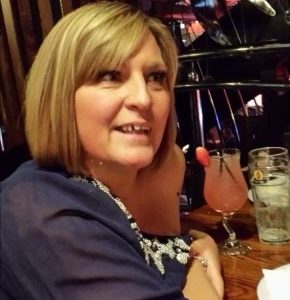 A fundraiser for a former NHS staff member will take place later this month.

On Sunday 21st August, family members and colleagues will be holding a fundraiser in memory of Verna Clark who passed away four years ago.

Raising money for St Oswald’s Hospice, the event is at The Duke of Wellington, Kenton Lane, Kenton, where there will be stalls, games, and a raffle from 1pm.

Verna worked for Cumbria, Northumberland, Tyne and Wear NHS Foundation Trust (CNTW), starting as a cleaner on a ward before becoming a support worker. She spent most of her final years working in Bamburgh Clinic in Gosforth.

She was diagnosed with cancer and received treatment at St Oswald’s Hospice. After a few weeks in the hospice, she passed away aged 49.

Nurse apprentice Laura-Jane Simpson has organised the event alongside Verna’s daughter Carly. Laura worked with Verna at the Bambugh Clinic, where Verna has a bench in her name.

She said: “Verna was like a mother figure on the ward. She was known for being tiny but very outspoken, everyone had so much respect for her.

“I think she would go mad if she knew we were hosting a fundraiser for her as she wouldn’t have liked the fuss. We wanted to give something back to St Oswald’s Hospice as they did everything for her and it was a lovely environment.

“We’re still thinking of her and wanted to do something nice especially when there can be so much negativity around. The event is open to everyone and we hope to raise as much money as we can.”