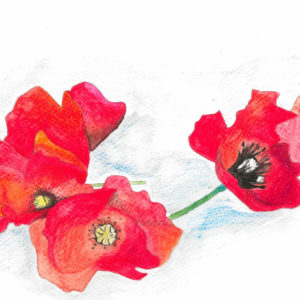 Patients at a Sunderland hospital have produced a series of artworks with the local community commemorating the end of the First World War.

Groups of service users at Hopewood Park Hospital in Ryhope worked throughout July-September to make a series of original artworks paying tribute to local people who lost their lives in the First World War and their families. The hospital’s service users are all living with severe mental illnesses.

The project is a collaboration with Ryhope’s St Paul’s Church, St Paul’s Primary School and residents of the nearby St Benedict’s Hospice.

The church, school and hospice feel at times like one team working together for the social inclusion of those in need in the local community.  It’s such a pleasure to be able to work with a community that is so welcoming and supportive of our service users.

By coming together with the local community to make these beautiful artworks our patients are building bridges between the hospital and its neighbours, while improving their wellbeing and tackling some of the stigma around mental health conditions.

The artwork includes watercolour paintings of scenes ranging from images of fields of poppies to a wounded soldier being tended to on the battlefield.

The paintings were used to make over 500 cards which have been posted through doors in the Ryhope area and delivered to local businesses, care homes and the hospital’s wards.

Service users will also be supported by staff to participate in a series of community events during Remembrance Week (5-11 November 2018) including attending community services, placing poppies on war graves and laying a poppy wreath at the Ryhope War Memorial on Remembrance Sunday.

It’s been great to have the folk from Hopewood Park joining forces with hospice service users and local school children to commemorate World War One soldiers in such a moving and personal way. We’re living in uncertain times, with some of the factors that led to war coming into prominence again. Therefore it is essential that we take time to remember, and if this can be done across the community so much the better.

The First World War artwork project is part of a range of ongoing social inclusion work of Hopewood Park to bring service users and the community together and reduce stigma.

Earlier this year service users and staff built and displayed model ships at Sunderland’s Tall Ships Race in collaboration with Cultural Spring, a six year project for people living in Sunderland and South Tyneside to experience and enjoy art and culture.

Hopewood Park service users and staff will also be working to plant a series of artistic flower displays at St Paul’s Church next year as part of the church’s 150th anniversary celebrations.

The work has been recognised as an area of best practice by the Care Quality Commission, whose latest inspection rated NTW as Outstanding. NTW is one of only two NHS mental health trusts to receive this rating nationally.