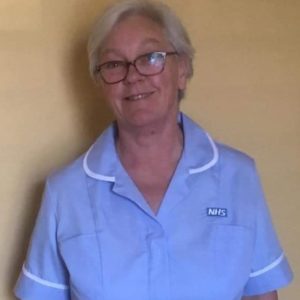 Clinical support assistant Carol Templeton has been redeployed to help on the wards during the COVID-19 pandemic.

Her colleague Ashley Murphy has shared Carol’s story as a way of saying thanks for her going to work on the frontline:

“Carol joined the Trust as a support worker in 1999 at Grindon Hall, a unit for people with learning disabilities.

Carol stayed with the team for 20 years, developing fantastic relationships with the service users she worked with.

In March this year Carol was offered a three-month secondment to work in the health promotion team in Sunderland. She was really excited about the opportunity but admitted that she was nervous about doing a role that was completely different to what she had done for so long!

Carol joined the health promotion team on 1st March. She had started her induction into the team and was feeling enthusiastic about this new opportunity. It was clear from the beginning that Carol was going to fit right in.

Then COVID-19 hit and we were asked to identify staff who could be redeployed to help support wards during this incredibly challenging time. Carol was put forward as she was so new to the team and hadn’t yet picked up her caseload – she was only three days in to her secondment!

Carol was asked to go to Ward 1 at Walkergate Park and she carried out her first 13 hour shift on Tuesday. She told me this was a shock to the system! Carol contacted me after her first shift to let me know how it went. She told me there was so much to learn but the staff had taken her under their wing and welcomed her warmly.

It has been a hectic few weeks for Carol, leaving a job she knew inside out to embark on a new secondment only to be thrown a curve ball and sent elsewhere. I wanted to acknowledge Carol’s amazing, positive can-do attitude.

She has never complained once and has taken everything in her stride. Walkergate Park works with some very complex patients but Carol is very much enjoying her new experience.

We are extremely proud of her and can’t wait to her have her back with the team but for now we know she is doing her best looking after those who need her.