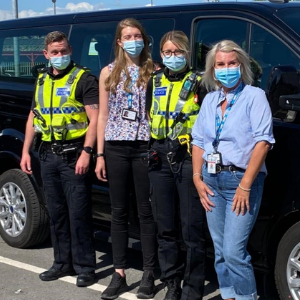 Cumbria, Northumberland Tyne and Wear NHS Foundation Trust (CNTW), a leading provider of mental health and disability services in the North of England, is working with Cumbria Police to pilot a new service. It sees mental health clinicians and police officers teaming up so they can respond appropriately to people who are in mental health crisis who come into contact with the police.

The service, known as the Street Triage Team, is being piloted in the Carlisle area. It has been running since the beginning of May 2021 with promising results.

I felt listened to when I needed support.

The Street Triage Team is new to Cumbria, though for several years CNTW have successfully been partnering with Northumbria Police to deliver a similar service in the North East.

Explaining the importance of this pilot, Temporary Detective Superintendent Dan St Quintin said: “The constabulary has seen a continued increase in the number of calls for service in which people are in crisis and are potentially a harm to themselves or others.

“These are often complex and difficult situations, however as a force our priority is to keep people safe. The Street Triage Team allows us and partners to get people in crisis the correct and most appropriate support for them.

“This pilot is an example of the continuing work we are doing with our partner agencies to address and understand the demand around mental health.

“This pilot may show that this new approach improves services and outcomes for our communities, which I really welcome.”

The Street Triage Team is made up of two senior Registered Mental Health Nurses and two experienced police officers, all of whom have undertaken intensive training. They work in pairs, with one clinician and one officer on duty during operating hours.

The Street Triage Team will support people of all ages who come into contact with the police outside of custody where there is concern that the person is in mental health crisis or distress. They are also able to respond to concerns about people in distress who may have a learning disability or autism.

They listen and help you make a plan…They made me feel reassured and safe.

Outlining how the pilot service works, Philip Johnston-Blackwell, Clinical Lead for the Street Triage Team, explained: “When police in Carlisle respond to an incident reported to them, the Street Triage Team will be asked to attend if control room staff or officers believe that someone involved is experiencing a mental health crisis or severe distress.

“The Street Triage Team attend and perform a face-to-face assessment of the person’s mental state. They are in an unmarked vehicle that’s modified to enable them to sit face-to-face with a person in the back for a private discussion.

“They discuss the most appropriate course of action to support that person and create a ‘safety plan’ with them. They can also refer them on to suitable support services if needed. The Street Triage Team can act as an advocate for the person who is in crisis, and use their clinical expertise to help police officers make informed decisions.

“Our main focus is making sure that the individual’s voice is heard and that they safely get access to the right support, at the right time, in the right place for them.”

If the team feel the person has further mental health or psychological needs to be addressed, they will refer them to the most appropriate service. If they do not feel a referral onto other services is needed, the team will perform a follow-up wellbeing check with the person after 24-48 hours. The person is also given information about who to contact if they need further support. Their GP is contacted to make them aware that their patient has had a crisis intervention.

Through this pilot CNTW and Cumbria Police are hoping to reduce unnecessary police detention of people in crisis under what are known as ‘Section 136 powers’. Section 136 of the Mental Health Act grants police the power to detain someone who is in crisis. The detained person is taken to a designated ‘place of safety’ for a Mental Health Act assessment.

The power is essential in some situations to keep someone safe, but in many cases experienced clinicians can help a person onto the right support pathways without the need for them to be detained.

The pilot has had a measurable impact on levels of detention. During the pilot, the service is being provided between 3pm and 1am, Tuesday to Friday – the peak times for mental health-related callouts identified during the pilot’s preliminary stages. Since May there have been 40 occasions during these times when police may previously have needed to use Section 136 powers, but during the pilot there have been no detentions while the Street Triage Team were on duty. The team have completed 34 face-to-face assessments, and have also provided remote advice and support on many other occasions.

The team have received plenty of positive feedback from those who have come into contact with them, with comments such as: “They were kind and caring and I felt listened to when I needed support;” “They listen and help you make a plan;” “I really like that they come to see you face to face;” “They made me feel at ease;” and, “They made me feel reassured and safe.”

Philip Johnston-Blackwell added, “We are really pleased that this pilot has so far received overwhelmingly positive feedback from the people we’ve supported. I am incredibly proud of the team and the fantastic results we have already achieved at this early stage.

“People report that they feel listened to and supported by the Street Triage Team, that they were helped to make a plan that worked for them, and that the team helped keep them safe when they were in crisis without the need to be detained under section 136.”

David Muir, Group Director for North Cumbria at CNTW, said: “The Street Triage Team pilot is part of wider developments to our services in the North Cumbria area. We want to ensure we are working closely with partner organisations to ensure there are easy, clear pathways in place for people in need of ongoing mental health support and assessment.”

The pilot will be reviewed in October.