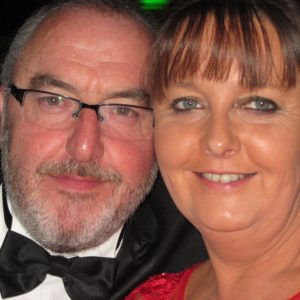 A charity golf tournament organised by a woman in honour of her late partner is set to raise thousands of pounds for a North East hospital.

Alan Davies from Newcastle passed away suddenly last September at the age of 51. Now his partner Louise Hill has organised a golf weekend this April at Westerhope Golf Club in his honour and to raise money for Walkergate Park Hospital in Newcastle.

The event is raising money for the SHINE Fund, a North East charity which helps support people receiving disability or mental health by providing ‘little extras’ which are not covered by central funding but can make a real difference.

All proceeds from the tournament will be used to support service users at Walkergate Park, which is part of Northumberland, Tyne and Wear NHS Foundation Trust (NTW) and provides a range of specialist care and rehabilitation for people with a disability caused by injury or disease affecting the brain, spinal cord or muscles.

When Alan passed away it was sudden, unexpected and heart-breaking. Alan’s memory will always be alive though, and we have decided to hold a charity weekend in his honour.

If Alan had survived it’s likely that he would have used the services at Walkergate Park, so I’m really pleased that the money raised from our event will go towards supporting service users at the hospital.

The support we’ve received from friends, neighbours, colleagues and Westerhope Golf Club has been amazing and we’re hoping to raise as much as we can for the SHINE fund.

We would like to say a massive thank you to Louise and everyone involved with these events for their generosity and support.

Our charity helps service users by supporting educational and leisure interests, providing special equipment and offering a wide range of activities that might not otherwise be possible.

The work the SHINE fund makes possible can have a transformative effect and we’re hugely grateful for the support of members of the public like Louise.

Phil Brown is one of Westerhope Golf Club’s ex-captains and was also treated at Walkergate Park after he had a stroke in 2011.

I wouldn’t be where I am today without the treatment I got from the fantastic staff at Walkergate Park, so I’m chuffed to bits that the events being held in honour of Alan will be raising funds to support patients at the hospital.

The events are being sponsored by a range of local businesses including Miller Homes where Alan worked. The weekend starts with a golf tournament on Friday 12 April with a meal afterwards and a raffle. There will also be a raffle and bottle draw on Saturday 13 April, followed by a live gig from local band the Pre-Amps.

Tickets are sold out for the Saturday but a few places for the golf tournament on Friday 12 April are still available. Places cost £160 per team of four players and people interested in taking part should contact the club directly at secretary@westerhopegolfclub.com or by phone on 0191 286 7636.

Walkergate Park Hospital is the first of its kind in the UK and one of the most advanced centres of its kind in Europe, with extensive experience and expertise in managing physical disabilities, neurobehavioural, neuropsychological, and neuropsychiatric problems.

The SHINE fund is a key part of NTW’s charitable activity and helps support people who use the Trust’s services by providing the extra things that can make a real difference.

The funding from SHINE does not replace the money used to fund care. Instead it helps to provide ‘little extras’ – therapeutic activities or items of comfort to assist with people’s care, treatment or rehabilitation, generally helping towards them living a happier, fuller life.

You can find out more about the Shine fund here.