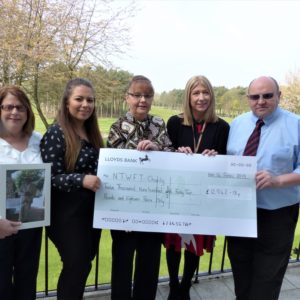 A Newcastle hospital has been presented with a cheque for over twelve thousand pounds from a charity golf weekend.

Louise Hill’s partner Alan Davies passed away suddenly last year at the age of 51. If Alan had survived it is likely that he would have used the services at Walkergate Park Hospital, a specialist neurological rehabilitation service which is part of Northumberland, Tyne and Wear NHS Foundation Trust (NTW).

Louise decided to organise a weekend of activities at Westerhope Golf Club in honour of Alan and to support service users at Walkergate Park.

The weekend started with a sold-out golf tournament on Friday 12 April, with every hole sponsored by a different local business including Miller Homes where Alan worked.

After finishing their round everyone was invited back to the clubhouse to enjoy a meal, take part in a charity raffle, and make a donation to enjoy a glass of one of Alan’s favourite single malt whiskies.

On Saturday 13 April guests enjoyed music from a local band the Pre-Amps, which also sold out weeks in advance.

The whole weekend was a massive success, the club was packed with people who knew Alan and wanted to pay tribute to his memory but we could have had three times that number if we’d had room.

I’m sure Alan would be pleased that an event held in his name could raise so much support for service users at Walkergate Park.

I’d like to thank all those who gave their support, and everyone who made this event possible – friends, neighbours, colleagues and of course Westerhope Golf Club.

I’d like to offer our grateful thanks on behalf of everyone at Walkergate Park and NTW to Louise for her support, generosity and hard work.

I’d also like to thank everyone who supported this event – this is an amazing total which really will make a hugely transformative difference to our service users.

We will now discuss with our service users and their carers how best to use this significant sum to help people receiving treatment at Walkergate Park. I hope that we can find a suitable way to make a permanent tribute to Alan’s legacy as part of this.

The money will be paid to NTW’s charity the SHINE fund, which supports people receiving disability or mental health care by providing ‘little extras’ which are not covered by central funding but can make a real difference.

Westerhope Golf Club will also be continuing to support Walkergate Park service users throughout the year, as this year’s club captain has selected the SHINE fund as his chosen charity for the season.

You can find out more about the SHINE fund at www.ntw.nhs.uk/about/charitable-funds

Walkergate Park provides a range of specialist care and rehabilitation for people with a disability caused by injury or disease affecting the brain, spinal cord or muscles.

More information is available at www.ntw.nhs.uk/locations/walkergate-park/