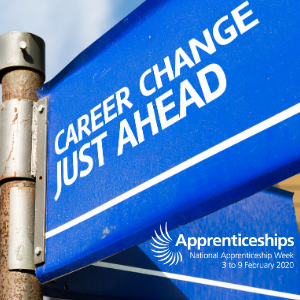 Kelly Anderson started her apprenticeship with Cumbria, Northumberland, Tyne and Wear NHS Foundation Trust aged 27, changing career and leaving a full-time job to re-train. She shared her experiences with us…

I started my apprenticeship in business administration three years ago, aged 27. During my apprenticeship, I got a job in the perinatal team in a Band 2 role and within a year I had secured an ‘acting up’ Band 4 role. It just shows that with the right attitude and hard work, apprentices can go on to progress a lot in a short space of time.

The whole process of being an apprentice was amazing for me. I left a full-time job at a school and took a pay cut to do my apprenticeship so it was quite a big risk for me, but I can say now that it’s paid off!

Coming into an apprenticeship at an older age wasn’t a problem. People were often shocked when they found out I was an apprentice, but I wasn’t treated any differently. Apprenticeships aren’t just for people fresh out of school! Being an older apprentice meant I had experience of being in the workplace before and I could bring different skills and knowledge to the role.

What I enjoyed most about my apprenticeship was that I could pick modules that would be the most specific to my role so you’re learning things that are relevant. It also means I was able to find out what my strengths were and what I liked doing.

We’ll be sharing the stories of apprentices from across our Trust throughout National Apprenticeships Week 2020 (3-9 February). You can find out more about our apprenticeships here or email getin2CNTW@cntw.nhs.uk