A piece of Prudhoe history finds a new home 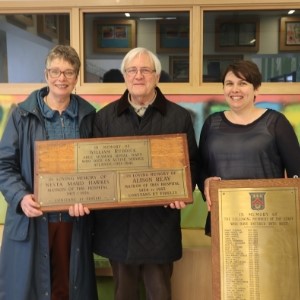 Historic plaques have been relocated so members of the public can view and enjoy them.

Prudhoe is an old mining town which lies 12 miles west of Newcastle upon Tyne and nestled in the woods on the outskirts of Prudhoe is Ferndene Hospital. Ferndene provides assessment and treatment unit for young people from across the North East and Cumbria, who have complex health, behavioural, emotional needs or a learning disability.

These services are provided by Northumberland, Tyne and Wear NHS Foundation Trust (NTW), a provider of mental health, learning disabilities and neuro-rehabilitation services.

In 2011, the purpose built centre opened its doors after nearly a century of care at the old Prudhoe Hospital.

When the old site was closed down, some brass plaques which were dedicated to some of the matrons, doctors and staff who worked at Prudhoe were removed and safely stored away. These plaques have now been loaned to the Prudhoe and district history society.

The society was formed over 25 years ago by Jim Standish, who is their life president. Len Franchetti, Military Archivist has for years been searching for the brass plaque dedicated to Able Seaman William Ruddick who died on active service in December 1941. This was one of the plaques removed from the old hospital site.

Len has been working hard to update the war records for servicemen from Prudhoe and the surrounding area who sadly lost their lives in World War I and World War II. The War Commission will now be informed about the plaque for Able Seaman Ruddick.

The Prudhoe History Society is thrilled that after many years of searching the plaques have come to light. They will be on hire from NTW and we will be hoping to put them on display for the public to view

Yvonne RitchieChair of the History Society

Bridget Lawson, Activity Co-ordinator at Ferndene officially handed over the plaques to Len and Yvonne, and said: “It’s lovely to know that some pieces of local history are now able to be shared with the public.”

If you are interested in being involved with the Prudhoe and district history society you can find out more information by visiting their website.