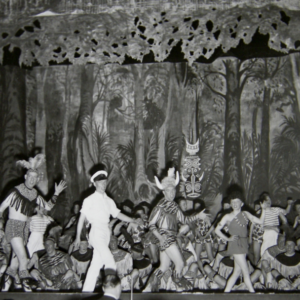 This year marks the 150th birthday of St Nicholas Hospital. Steeped in a long and rich history, the site has taken on many guises in its 150 years, some of which might surprise you. As part of the celebrations, we have compiled a list of 10 things you might not know about St Nicholas Hospital:

1. All of the wards in St Nicholas Hospital were built to be south facing so that the patients could have a nice view and plenty of sun in their rooms. Before the area became more built up, you could reportedly see all the way to Newcastle from the wards.

2. The Jubilee Theatre used to be known as the recreational hall. The Grade II-listed hall featured staff plays, a cinema and Theatre Royal rehearsals; even Laurel and Hardy tread the boards here in 1953.

3. In 1910, the hospital was self-sufficient, with 40 acres of grazing land where staff and patients grew their own potatoes, oats, fruit and hay. The hospital was home to a menagerie of animals including 100 chickens and over 150 pigs, as well as ducks and horses.

4. The second stage of the building (the East and West Pavilions added in 1884) was designed by local architect Mr Plummer. He was chosen after outcry at the initial building being designed by a Scotsman, Mr Moffet from Edinburgh!

5. St Nicholas Hospital served as a war hospital from 1915-1918, providing accommodation for 1,040 casualties. The military handed the hospital back in 1921, but it was said to be in a bit of a state, with buildings and furniture in dire need of refurbishment.

6. When the site first opened in 1869, it was named the Newcastle upon Tyne Borough Lunatic Asylum. It did not become St Nicholas Hospital until 1948, with the creation of the NHS.

7. No, the hospital is not named after Santa, St Nicholas is the patron saint of sailors, repentant thieves and others.

8. Following the 1959 Mental Health Act, patients used to be given pocket money for domestic tasks, and cigarettes became a common form of currency within the wards.

9. Patients were expected to do domestic tasks for much of the hospital’s history and were given jobs such as sewing, working the land and lighting the fires. At one time, the site even included a carpentry, cobblers, and tailors’ workshop where patients worked.

10. The hospital is home to a resident ghost known as ‘Matron’ who has reportedly been seen in what is now the training department. But don’t worry, she is said to be friendly!

Local historian Peter Nichol kindly came to St Nicholas Hospital to give a presentation to staff on the history of the hospital. Photos courtesy of Peter Nichol.