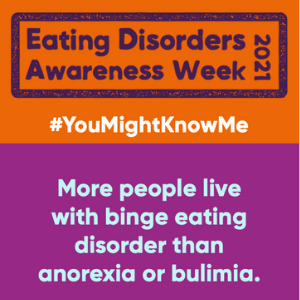 The UK has a dedicated week every year to raising awareness of eating disorders because they are serious mental health disorders, not lifestyle choices or fads. And although people’s understanding of them has improved over time, there are still lots of myths, stigmas, and misunderstandings that people have about eating disorders.

The theme for this year’s awareness week (chosen by Beat, the UK’s eating disorder charity which leads Eating Disorders Awareness Week) is binge eating disorder. Compared to anorexia and bulimia this is a lesser-known illness, but just as serious and important to raise awareness of.

Specialist eating disorders services run by Cumbria, Northumberland, Tyne and Wear NHS Foundation Trust are joining in with this national conversation to encourage a better, more helpful, and more hopeful understanding of this life-affecting and serious disorder.

Most of us over-indulge from time to time; at Christmas, for example. But for people with binge eating disorder (BED) their over-eating is driven by a compulsion which feels out of control. They often over-eat in a secretive, hidden way, and this can cause them a lot of emotional distress. For someone with BED, the amount of food they eat is far more than an occasional indulgence. They might overeat a lot of food very quickly, or very frequently, and can struggle with binge eating for a significant length of time. This is often accompanied by intense feelings of guilt, shame, disgust, depression, and anger.

Are all people with binge eating disorder overweight?

BED has a similar chemical pathway in someone’s brain as an addiction to drugs or other substances – so, just as with other addictions, willpower alone usually isn’t enough to overcome it. And dieting often means significantly restricting your food. That’s more likely to make the person struggle more, continuing the cycles of guilt, shame and secrecy which prevent people seeking the help they need. Dieting can trigger more disordered eating through a cycle of restricting and binging. So, while it might feel logical if you’ve never experienced an eating disorder, overcoming binge eating isn’t as simple as just sticking to a diet. Saying so implies that people with this disorder are weak or lazy, which isn’t true and doesn’t help them overcome it.

But binge eating doesn’t sound that serious, compared to other eating disorders?

Whilst anorexia does have the highest mortality rate of any mental illness, that doesn’t mean other eating disorders aren’t serious. Binge eating disorder can lead to diabetes, high blood pressure and high cholesterol. It can also cause low self-esteem, anxiety, and depression, leading to relationship difficulties, isolation, and loneliness. People with BED often struggle a lot because of their disorder.

If you feel that you, or a loved one, is suffering from an eating disorder, please contact your GP for advice.

People can also find a range of useful information and resources at on the Beat website.