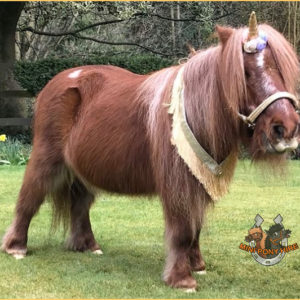 A pint-sized pony who has visited patients at Cumbria, Northumberland, Tyne and Wear NHS Foundation Trust (CNTW), has been nominated for a national award.

He was rescued by Lisa Walker, owner of award-winning family business Mini Pony Hire, after he was found abandoned by the side of the A1 over 25 years ago. Now, thanks to his wonderfully calm nature, he has shown hundreds of children how to care for ponies, taught children about disabilities and offered comfort for those with dementia.

Lisa said: “We are delighted that Smurf has been nominated for this award and it would be an absolute honour for him to win.

“Smurf shows affection to everyone he meets. Everyone always says they feel blessed and comforted to have met him.”

Smurf has already had quite the year, appearing on BBC Radio Newcastle and BBC News. The video of Smurf’s appearance went viral after airing on the breakfast and lunch time news.
Another highlight of this year has been granting a wish to a lady with dementia who believes that unicorns exist. Smurf visited the lady dressed as a unicorn, making her day.

The winner will be announced at an awards ceremony at Cheltenham Race Course on Wednesday 4 December.

Alnwood and Ferndene provide assessment and treatment for young people who have complex mental health needs. Patients at both units enjoy a range of therapy activities, which include visits from Smurf.

Katie Martinez, occupational therapist at Alnwood Unit, said: “The young people really enjoy having the ponies to visit and they always have a lovely, calming effect on everyone.
“In addition to the therapeutic benefit, the sessions are also very informative and the young people have the opportunity to learn lots of interesting facts. We’re looking forward to the next visit in January!”

Both Alnwood and Ferndene are part of Cumbria, Northumberland, Tyne and Wear NHS Foundation Trust, a provider of mental health and disability services.