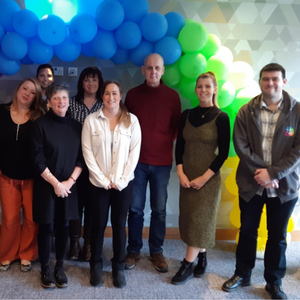 A year after introducing ‘peer supporters’ into mental health and disability services across Cumbria, teams at Cumbria, Northumberland, Tyne and Wear NHS Foundation Trust (CNTW) are reflecting on their success.

Explaining what a Peer Supporter can bring to a clinical service, Peer Support Operational Manager Faye Atkinson said: “Every Peer Supporter’s role is a little bit different, particularly depending on what type of service they are part of. Some Peer’s work with Carer’s and have developed peer led carer support groups, as well as making individual calls to carers to check on their wellbeing. They might offer visits to people who we are supporting in the community. Some help service users to engage with care planning, to ensure they’re involved in steering their own treatment.

Everywhere they work, Peer Support staff offer connection and a mutual shared experience to the people we support.

“Many of them are involved with the North Cumbria Recovery College too, leading classes ranging from emotional resilience, ‘draw and talk’, walking groups, Dungeons and Dragons, and ‘happy mums’ sessions.

“But everywhere they work, Peer Support staff offer connection and a mutual shared experience to the people we support.”

The first nine Peer Supporters joined CNTW in January 2021, working in a range of services including the Crisis Team, specialist Children’s Learning Disability Team, and a number of inpatient wards. Starting their new roles just before another national lockdown at the start of the year was a challenge, but every Peer got through it successfully with support at all levels.

The introduction of Peer Supporters to CNTW’s North Cumbrian services has gone even better than Faye and her team expected. “We actually advertised eight Peer Supporter posts,” she explains, “but so many excellent candidates responded to the advert that we actually ended up hiring nine Peers.”

“We were very pleased to find that every service team was really curious about Peer Support, wanting to learn more about how it could help them deliver better care and support service users more effectively. Each team who has been joined by a Peer Supporter has given them the time to explore and develop this new role, which is so valuable.

“The leadership team in North Cumbria have really invested in their commitment to having Peer Support become an integral part of all services. They have worked really closely with us, always been open to ideas and suggestions and been very supportive from the start.”

The leadership team in North Cumbria have really invested in their commitment to having Peer Support become an integral part of all services.

One year later, there are now 22 Peer Supporters working for CNTW across North Cumbria, and recruitment of eight more is underway.

The first intake of Peers were also joined by Emma Wakefield and Tyne Percival, who joined the North Cumbria team as Senior Peer Supporters having previously worked as Peer Supporters elsewhere in the Trust.

Using their previous experience, Emma and Tyne placed an emphasis on intensive mentorship within each Peer Supporter’s main place of work, supporting them to embed and integrate into their roles in teams across North Cumbria. As Senior Peer Supporters, Emma and Tyne also deliver training and participate in leadership-level discussions and meetings, influencing the Trust to embrace peer support at all levels. The team feel that this support has been key to their success and rapid growth in North Cumbria.

In North Cumbria, we wanted to start strong with good support in place for each new Peer. And as a result, all the Peer Supporters who joined us at start of 2021 are still here and developing in their roles.

Tyne Percival explains, “We put this intense support in place based on what we’d learned from introducing Peer Support in other localities and teams. As there is usually only one Peer Supporter on a ward or in a team, it can be an isolating role; other healthcare professionals almost always have someone else in their profession as part of a team to bounce ideas off. Unfortunately, we have seen Peers leave in past because of this lack of support around them. So, in North Cumbria, we wanted to start strong with good support in place for each new Peer. And as a result, all the Peer Supporters who joined us at start of 2021 are still here and developing in their roles.”

The team are also focussing on a career progression pathway in the Trust for those Peer Supporters who want to develop further. Six of the Peers have also completed the first ever Higher Education England Peer Support Education Programme, with others hopefully joining the next cohort.