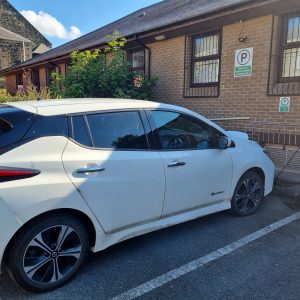 Since the Board at Cumbria, Northumberland, Tyne and Wear NHS Foundation Trust (CNTW) officially recognised the ‘climate and ecological emergency’ in 2020, and launched its ‘Green Plan’ in April 2021, teams across the Trust have made big changes to make their work more sustainable. One of these is the Pharmacy team, who’ve saved nearly 8 tonnes of carbon dioxide emissions, and are on track to save much more thanks to new energy-saving upgrades to their building.

The Trust’s specialist hospital pharmacy staff cover a wide area, as CNTW serves the whole of the North East and North Cumbria. This means car journeys between sites are often unavoidable.

In March 2020, the Pharmacy team began using an electric vehicle as a ‘pool car’ for their department, and added a second electric pool car in December 2021. One car is based at St Nicholas Hospital in Newcastle, and the other at the Carleton Clinic in Carlisle.

The introduction of electric pool cars has slashed the carbon footprint of staff’s important journeys between hospital sites in Newcastle, Carlisle and Whitehaven.

Since March 2020, pharmacy staff have travelled approximately 28,000 miles to support teams around the Trust. Adopting electric pool cars for these journeys has saved approximately 7.85 tonnes of carbon dioxide from being emitted – that’s enough to fill almost eight hot-air balloons. It has also cut down on fuel costs.

The 200+ mile range of both electric pool cars means that staff don’t get anxious about needing to stop and re-charge on their journeys between hospitals. And when they arrive, they get priority access to the increasing number of charging points on CNTW’s sites.

The Pharmacy team’s base at St Nicholas Hospital is also benefitting from significant energy saving upgrades. Their building has recently had 300mm roof insultation added, along with double-glazed windows and energy-efficient LED ceiling lights.

By keeping in the heat and generating light more efficiently, these changes will reduce the amount of energy – and therefore the carbon emissions – that it takes to run the building. Saving energy will also reduce the Trust’s utilities bill.

The Trust’s Estates team predict that the additional insulation will reduce heat lost through the roof by 85%, and the LED lighting upgrades will reduce energy use by 50%.

Explaining why the Pharmacy team have been motivated to work more sustainably, Tim Donaldson, Chief Pharmacist at CNTW, said: “As health professionals, we have become increasingly aware of the damaging effects that air pollution and climate change are having on the health of the people we care for.

“Recognising the urgency of acting on the global climate emergency, our team wanted to do our bit to reduce emissions – both on our local roads, by switching to electric vehicles where car journeys are necessary, and by making our buildings more efficient to run.

“Everyone who cares about our collective futures can make a difference, at home as well as at work. Saving energy by doing things like adding better insulation can save you money too, and using public transport, cycling, and walking wherever possible (and switching to electric vehicles for essential car journeys if you can) has a big impact.”

Conference to focus on health of patients and the planet

The Pharmacy team at CNTW have also been actively involved in organising the annual Great North Pharmacy Research Collaborative Conference, which this year is themed around ‘Sustainability in Pharmacy: The health of patients and the planet.’

The production and supply of medicines accounts for about 25% of the NHS’s carbon footprint in England, and this event will bring together pharmacy professionals to discuss and learn how to make their everyday decision-making more sustainable.

Organisers have also taken care to reduce the environmental impact of the event itself as much as possible.