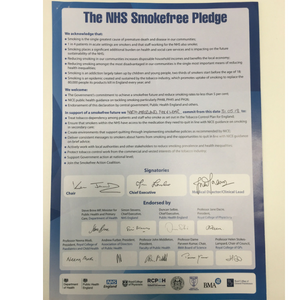 Senior staff at Northumberland, Tyne and Wear NHS Foundation Trust (NTW), a provider of mental health and disability services have made a public commitment to reduce smoking rates among both their patients and staff.

NTW Chair, Ken Jarrold, Chief Executive, John Lawlor and Medical Director, Dr Rajesh Nadkarni have all signed the pledge which has been endorsed by NHS England, the Department of Health, the Royal College of Physicians and the British Medical Association.

The NHS Smokefree Pledge is a really positive step towards improving the health of people with serious mental health conditions who die on average 20 years earlier than the general population due to smoking. We will play our part by signing the pledge and continuing to reduce smoking rates across our organisation.

The theme for World No Tobacco Day 2018 is tobacco and heart disease and will highlight the damage that smoking does to heart health which is responsible for 12% of deaths from cardiovascular disease.

Smoking remains the lead cause of preventable death in the UK. Although smoking in the general population has declined steadily since the 1970’s, it has remained high for those with mental health conditions. In England, 40.5% of adults with a serious mental illness are smokers which is more than twice the rate of the general population at 15.5%.

By signing the pledge NTW has committed to actively work with local authorities and stakeholders to reduce smoking prevalence and health equalities, to support the government action at a national level and join the Smokefree Action Coalition.

This website uses cookies to improve your experience while you navigate through the website. Out of these, the cookies that are categorized as necessary are stored on your browser as they are essential for the working of basic functionalities of the website. We also use third-party cookies that help us analyze and understand how you use this website. These cookies will be stored in your browser only with your consent. You also have the option to opt-out of these cookies. But opting out of some of these cookies may affect your browsing experience.
Necessary Always Enabled

Some cookies are essential for you to be able to experience the full functionality of our site. For example, they allow us to maintain user sessions and prevent security threats. They do not collect or store any personal information.

These are the cookies that help certain non-essential functionalities on our website. For example, analytics tools to measure how you use the website so we can improve it based on user needs. This could include anonymous information of how you got to the site, the pages you visit and how long you spend on each page.