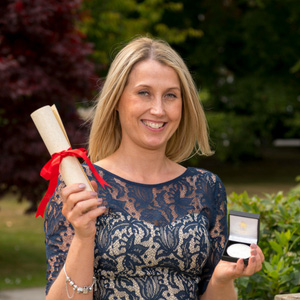 A nurse from the Community Learning Disabilities Team at Benton House has received a prestigious award for her dedication to the profession.

Sherilee Gray, a learning disabilities nurse at Northumberland, Tyne and Wear NHS Foundation Trust is one of only six nurses in the country to receive this year’s special ‘Heath Award’, for the commitment she’s shown during her nursing degree; both academically and within her work placements.

The Heath Award, which was established in 1892 by George Yeoman Heath, former President of the Royal College of Medicine, is presented each year to the best nurses and midwives graduating from Northumbria University’s nursing and midwifery programmes.

Sherilee undertook her work placements with the team at Benton House while studying for her degree, and went straight into a job with them as soon as she qualified.


I was inspired to become a nurse by my brother, who has Asperger syndrome; although his condition isn’t categorised as a learning disability, it made me want to discover how those living with learning disabilities can be supported.

She said: “Everyone on my course was brilliant so it was a real shock and honour to be singled out for the award, but I’m so proud to receive it.

“I’ve always wanted to work in nursing and started an access course when my children were young but didn’t complete it. I applied to Northumbria whilst still living in Norfolk, and we moved up here so I could study, plus my partner is from the area. His mum works in mental health in Newcastle, and she recommended Northumbria based on her positive experiences throughout her career.

“Northumbria has an excellent reputation for being one of the best universities for nursing and I enjoyed every moment. I did my third year placement with the community learning disabilities team at Benton House and went straight into this job as soon as I completed my studies. I absolutely love being a nurse; every day is a new challenge and brings a huge amount of satisfaction.”

This year’s winners, including Sherilee, all achieved First Class Honours in their nursing degree programmes and were chosen after being nominated by academics and staff with whom they worked whilst on placement.

Sherilee was presented with her award, a medal and certificate at a special ceremony by Dame Jackie Daniel, the new Chief Executive of the Newcastle upon Tyne Hospitals NHS Foundation Trust.