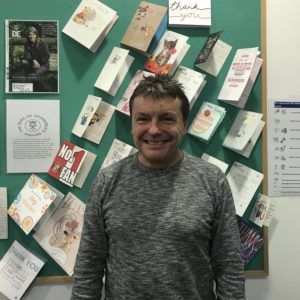 A long-standing ward manager is bidding farewell to the NHS after 38 years.

John Callender, who has been the ward manager at Fraser ward in Ferndene, part of Cumbria, Northumberland, NHS Foundation Trust (CNTW), for the last five years, will leave the Trust on 30 November following a fruitful career.

John began his career at Prudhoe Hospital as a student nurse aged 18. Three years later he became a registered nurse and it wasn’t long before he was promoted to ward manager. Now 56, John says he has seen a number of changes at CNTW.

Born and raised in Prudhoe, working in mental health and learning disability services runs in the family. Both his mum and dad worked at Prudhoe Hospital, as a nurse and porter respectively.
“I have always wanted to be involved in care”, John said. “Looking after people has been my favourite aspect of the job. The patients have always been a priority.”

As ward manager, John has been responsible for the day to day care and treatment of patients on Fraser ward. He also supported staff with their progression and development, and states that one of the best parts of the job has been seeing people do well.

“Whether that’s patients, carers or staff, seeing people develop is a great feeling”, he said.

Something John highlights as one of his greatest achievements is the development of Stephenson at Ferndene and Lennox at St Nicholas Hospital. He also cites these developments as some of the biggest challenges he has had to face during his career.

John is also particularly proud of Fraser’s involvement in a national quality initiative with the Royal College of Psychiatrists, which recognises the positive work the unit has been doing.
John said: “I have been really lucky with the support I have had throughout my time here. What I’ll miss the most is just being with people and knowing everything that’s going on.”

His plans for retirement include more cycling and fishing and spending more time with his family. One of his son’s lives in Australia so a trip to visit him is also imminent.

Peter Haddow, nursing assistant at Fraser, said: “John was my first ever manager in the 80s and interviewed me for my current role. We still laugh about the green suit I wore for my interview. He’s a great leader who embraces differences and always has a positive attitude.”

Gail Hailes, ward manager at Stephenson House in Ferndene, said: “John has been a massive influence and support throughout my career. He encouraged me to progress and mentored me during my early years of management.”

Lisa Rippon, associate medical director, said: “I first met John in 1999 and over the past 20 years have had the pleasure of working with him as a consultant on both Stephenson and Fraser. John has been a fantastic colleague, always supportive and motivating, and he has a fantastic knowledge of football and rock music!

“The thing that has always stood out about John for me is his continual advocacy for the young people in our care, challenging others if he believes their best interests are not being considered. John has been instrumental in introducing activities for young people that improve their quality of life and mental health. He will be a huge loss to all of the team on Fraser, the Children and Young People’s Inpatient Service and the Trust.”

John will be replaced by Fraser staff member Paul Moody. Fraser is a unit in Ferndene which provides care and treatment for young people with learning disabilities and other mental health problems.

Ferndene is part of Cumbria, Northumberland, Tyne and Wear NHS Foundation Trust, a provider of mental health and learning disability services in the North East and North Cumbria.