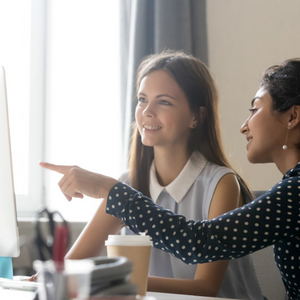 I started believing in myself. Having the extra support meant that I could push the ‘submit’ button. Knowing that there was someone supporting me along the way and listening to any queries was a weight lifted off my shoulders. Furthermore, re-assurance that I wasn’t doing anything wrong, which meant I didn’t get down as much!

Since the service began offering employment support to people receiving psychological treatment, the employment advisors have received over 1,600 referrals. 36% of those patients have successfully found a new job, returned to work, remained in work or taken a positive step such as further training, education or voluntary work.

The majority of patients who chose to provide feedback stated that the support made a significant positive difference towards their recovery.

One patient explained how leaving her job and finding another with the support of a First Step Employment Advisor has made a significant difference to her:

I had Obsessive Compulsive Disorder (OCD) for all my life, which was making my working life intolerable, hence depression also set in. Although my employers did try to help at the start, their lack of knowledge of mental health was making things worse and I was in no position to fight my corner. [First Step’s] employment support made me feel as though someone was there to help me. They liaised with my employer to try and educate them as to mental health problems.

She continued: “As with OCD and the length of time I had had it, I needed time at home to get better […] Without [First Step’s] support I couldn’t have gone through the process. Since leaving that employment I have had so much help with my CV, cover letters, interview techniques. I tended to panic over things that were happening as I had never been through this before.

“Emails were always answered promptly, and I never felt as though I was being a nuisance and always had my mind put at ease. I have been given advice about trying other lines of work, which I did, and now I have a temporary job which I really enjoy and is more suited to my personality. I would never have thought at the beginning of my journey that I would ever be in this position. I have been given advice for things to do going forwards and feel now I am in a position to tackle the future.

“I cannot thank you enough for the support I have been given in what has been by far the darkest time if my life.”

Other patients receiving employment support as part of their treatment have also described the impact it has had on their recovery:

The help and advice has been incredibly valuable. It helped me to stay in work and explore solutions for changing my role towards what I wanted.

Thank you for your time, patience and guidance, your words of encouragement made such a difference to me.

A key aim of employment support in IAPT is to provide access to advice and guidance as early as possible, so that the patient receives combined support from a psychological therapist and an employment advisor. One patient explained how this approach has helped them:

I was very worried about my job role not changing once I returned to work, as this was part of my issues. Once I spoke to an employment advisor, I started to feel much happier and confident that changes could be made with my employer if needed and that the advisor was there for support all the way.

“For many of our patients, good work is really important for their health and wellbeing. Unfortunately, when someone loses their job or has difficulties at work, that can have a huge impact upon their mental health. The additional support from an employment advisor during therapy can make a significant difference to how people are feeling about themselves and their situation”.

As one patient explained:

It has helped me re-evaluate myself, even if I have not necessarily worked in that environment doesn’t mean I don’t have experience that they may require. I use methods to try and not feel disappointed if I don’t get a job I wanted, and most importantly use it all as experience for when a new job offer comes along.

If you live in North Cumbria and need support with your mental health, please visit the First Step webpage where you will find more information about making a referral to North Cumbria First Step, or speak to your GP who can give you advice about the type of support you need.

If you live in a different area, you can use the NHS website to find your local Psychological Wellbeing Service and seek support. (These are sometimes known as IAPT Services or Talking Therapy services.)