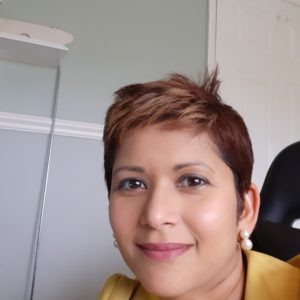 She joined Cumbria, Northumberland, Tyne and Wear NHS Foundation Trust (CNTW) at the beginning of the pandemic, during a time of uncertainty.

Since she joined the Trust, she has been instrumental in contributing to the virtual staff common rooms with the help of NHS England and Improvement, and has become the Trust Lead for the Staff Psychological Centre. This specialises in evidence-based psychological interventions and therapies for staff, including consultancy and training, coaching, mentoring and work to promote a healthier lifestyle both in and out of work.

While there is no doubt Kalpita is successful in her career, she has not always felt this way.

“I have been at the receiving end of offensive and abusive language in previous workplaces,” she explained.

“I have felt humiliated and judged and made aware that I was different.”

As a result, Kalpita was beginning to feel a deep disconnect to her culture and identity. She was stuck in a dilemma between choosing to be her authentic self and trying to fit in.

“The more I tried to fit in, the unhappier I became,” she added.

“I began to question who I was and if my identity really mattered anymore, which was not something I had experienced before.”

Kalpita began to feel invisible in the workplace, every time she tried to escalate an issue she felt she was ignored. Instead, she began to keep quiet, fearful of any repercussions on her career and reputation.

Not speaking up went against everything Kalpita stood for, which affected her emotional health and wellbeing.

“I had always seen myself as a strong and resilient person. But the experiences had left me feeling wounded.”

These feelings led Kalpita to wonder how similar experiences might impact on someone more vulnerable who didn’t have the same social support and resilient mind set to cope as she had.

Soon, Kalpita realised something had to change. “I had to show compassion for myself and begin to reclaim my identity, my uniqueness and diversity.

“I reconnected with my friends, family and community and with my heritage, culture and traditions. I realised I had to take responsibility to accept who I was and use this to make positive changes.

“It’s important to acknowledge the stigma people of colour can face and that it does happen.”

Joining CNTW has felt different to Kalpita. “I have realised what it’s like to be involved and included in decision making. This has been weird yet empowering. I feel valued and able to use my voice to help others who may feel excluded, oppressed, undermined or side-lined. Being able to use my voice is an immensely rewarding experience.”

Kalpita says she is thankful to the bullies who have taught her important life lessons.

“We all need to celebrate our own uniqueness and stay true to our values.”