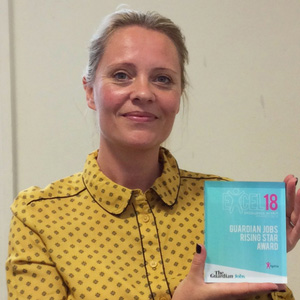 A North East human resources manager has a bright future ahead of her after winning a Guardian Jobs Rising Star award.

Victoria Bullerwell, Workforce and OD Manager at Northumberland, Tyne and Wear NHS Foundation Trust (NTW) a provider of mental health and disability services, has been recognised for her hard work and commitment.


I was extremely proud to win, I feel immensely lucky to work for such a fantastic organisation that supports and develops its staff.

The award recognises up and coming HR practitioners who have a bright future ahead of them.  Entrants can be nominated by a senior manager or can self-nominate and must have worked in HR for a minimum of two years.

One of Victoria’s many achievements is her involvement in developing Audit One, a service which itself has recently been recognised at the HSJ Value Awards.

Victoria has been described by her colleagues as a ‘leading light’ with tireless energy and enthusiasm.  Victoria is no stranger to awards, as in 2017 she won the ‘Behind the scenes’ individual award at the Trusts Staff Excellence awards.