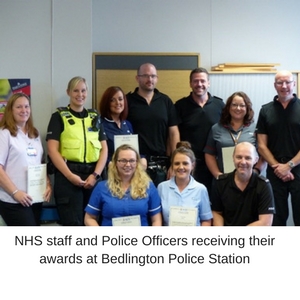 North East NHS staff have been commended by Northumbria Police
Six staff from Northumberland, Tyne and Wear NHS Trust (NTW), a provider of mental health and disability services, were invited to an awards ceremony held by Northumbria Police to receive a commendation from Sharon Scott, Chief Superintendent, from the Northern Area Command. Northern.

The commendation recognises the value of collaborative working between the Police and nursing staff.


I was so impressed with the nursing staff, I felt it only right that they should receive an Area Command Commander’s Compliment. Their work was outstanding and incredibly deserving of recognition. Efforts like this go to show how effective working together with partner organisations can be. Great work by everyone involved.

The award is normally reserved for members of the Police Force and this is the first time it has been awarded to NHS staff.

As a result of successfully working together, staff from St George’s Park in Morpeth, Northumberland, now attend any relevant After Action Review boards, which reviews Police incidents. Previously these were only attended by Northumbria Police personnel.