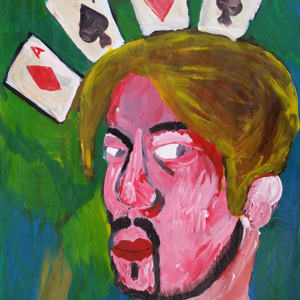 Artworks created by North East NHS patients have won the highest trophy possible in a national arts competition that champions the creativity of ex-offenders.

The Koestler Awards celebrate all forms of art created by ex-offenders, secure patients, and detainees. The awards aim to challenge negative stereotypes and help people lead more positive lives by motivating them to participate and achieve in the arts.

Five pieces by patients of Northumberland, Tyne and Wear NHS Foundation Trust (NTW) received Platinum Awards in this year’s competition, the top accolade handed out by Koestler Awards judges. The latest awards received roughly 7,000 entries, which were then judged by some of the leading lights in British contemporary art.

Artworks created by NTW patients have already been on display at London’s Southbank Centre in the national Koestler Awards exhibition, ‘We Are Human’, which was curated by poet Benjamin Zephaniah.

A presentation to honour the achievements of NTW patients in the Koestler Awards was held at Northgate Hospital last week. More than 60 people gathered at the hospital to see patients presented with their awards.

One patient said: “It was really nerve-wracking getting up to get my award in front of so many people but I felt really proud of what I’d achieved. And my paintings for the next competition are even better!”

This was the fifth annual Koestler Awards presentation held at Northgate Hospital in Morpeth, which championed more than 70 entries that came from NTW patients.

Patients from Bamburgh Clinic, a unit for men who have mental health issues and have been in contact with the criminal justice system at St. Nicholas’ Hospital in Newcastle, won a Platinum Award for a group sculpture called The Comfort Bubble. Another piece by a NTW patient, Ahoy!, was a Platinum Award recipient, as was painting, Red Fish.

For me one of the best parts is reading out the judges’ handwritten comments at the presentation, so patients hear an outside expert opinion about their individual artwork and receive that encouragement.

Other entries included Get Lucky, which won a Certificate in Painting, and Samurai Warrior, which won a Highly Commended Award in Calligraphy.

Arts Project manager Jane Akhurst said: “For me one of the best parts is reading out the judges’ handwritten comments at the presentation, so patients hear an outside expert opinion about their individual artwork and receive that encouragement.

“We had four Platinum Awards at Northgate this year, plus one at Bamburgh, and this is a lifetime achievement for those patients in receipt of the top Koestler Awards, of which there are very few given out across the whole UK.”

The Koestler Trust is the UK’s leading prison arts charity. Founded by writer Arthur Koestler (author of the classic prison novel Darkness at Noon), it has been awarding, exhibiting and selling artworks by offenders, detainees and secure patients for 54 years.

The Koestler Awards tend to receive over 6,000 entries a year in 52 artforms from over 300 prisons and other establishments  inspiring offenders to take part in the arts, raise their aspirations and transform their lives. Koestler exhibitions attract 50,000 visitors at venues across the country annually, showing the public the talent and potential of offenders and people in secure settings. The Koestler Trust has no endowment or capital ¬and its work depends entirely on grants and donations.

Northumberland, Tyne and Wear NHS Foundation Trust (NTW) is one of the country’s largest mental health and disability trusts, which serves people in the North East and beyond. It provides care and support for a population of 1.4million people from Berwick, through Tyneside and down to Sunderland.