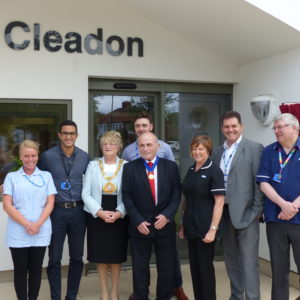 Cleadon Ward, is run by Northumberland, Tyne and Wear NHS Foundation Trust (NTW), a provider of mental health and disability services and one of only two in the country to be rated as outstanding by the CQC.

Cleadon is an 18-bed assessment and treatment unit providing modern purpose built accommodation for older people who primarily are experiencing mental health issues, but also have physical frailty. It provides fabulous internal and external accommodation and facilities. The new unit is part of the specialist Older Persons Centre working alongside the Dementia units of Mowbray and Roker Ward, and the challenging behavior unit of Marsden.

21st century facilities to support the highest standards of care

Clinical Nurse Manager, Rob Bailey, said: “The staff and service users on the ward have worked closely with the Capital Planning Team and Laing O’Rourke Construction in building this fabulous unit, which will provide the Older People of Sunderland and South Tyneside with 21st century facilities to support the highest standards of care. It gave us great pleasure to welcome Cllr MacKnight to officially open the unit. Thank you to everyone who has been involved in this project.”

Chief Executive, John Lawlor, welcomed Cllr MacKnight to the unit. After being introduced to NTW staff, Cllr MacKnight was given a tour of the unit. She saw first-hand how the bedrooms provide a safe environment for patients which can encourage the healing process for people who are physically frail. Cllr MacKnight also had a walk around the attractive outdoor courtyard which offers patients the opportunity to indulge in a passion for gardening by tending to the raised flower beds.

The unit features artwork designed by award-winning designer Dan Savage of Artstop Studios which was developed with the involvement of staff and patients. It provides a welcoming and pleasant environment and features a number of bespoke art installations such as artwork windows and wall papers featuring local landmarks.