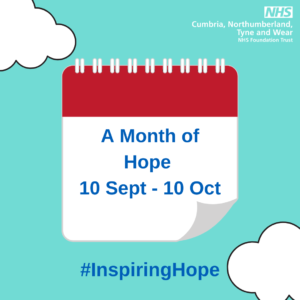 A local NHS Trust is hosting a ‘Month of Hope’ encouraging people to share their mental health coping strategies.

The idea came about last year when Paul worked for an NHS Trust in Greater Manchester. After changing jobs he knew it was a legacy he wanted to continue.

Finding that service users connect more with people who are going through similar experiences, the month will see inspiring messages shared via social media. This could be anything from a poem, a song or a quote, everyone has their own way of coping.

Aimed at people who may have experienced mental health issues, suicidal thoughts or those who have attempted suicide, the Trust would like to know what it is that helps people get through a dark time.

“When people hear the word suicide they often switch off because it’s a difficult thing to talk about,” Paul explained.

“By using the message of inspiring hope instead, we are able to focus on the positives and people are more likely to engage with it. Marking these two important dates with a month in between we hope will help raise awareness of mental health and encourage conversations around it.”

Paul’s own personal favourite quote is ‘Don’t wait for the storm to pass, learn how to dance in the rain’. He added: “This quote resonates because just as storms don’t last, the dark periods don’t last either.”

Paul has enlisted the help of the Trust’s Patient and Carer Involvement Team, whose role is to facilitate the involvement of service users and carers in contributing to services.

The team is made up of peer supporters who draw on their own lived experiences to share insight, understanding and empathy with others on their journey to recovery. A peer supporter’s job is to challenge the stigma around mental health and promote hope and recovery.

“For me, there’s nothing more valuable than peer support,” Paul said.

Paul works in a Crisis Resolution and Home Treatment Team (CRHT) based in Carlisle. He works on assessment and referrals, dealing with calls from the police and ambulance services for people in crisis. His role is to develop safety plans, signposting to other services and self-help information, and offering face-to-face assessments.

“We know a lot of people have struggled during lockdown as support hasn’t always been available,” Paul explained.

“Mental health practitioners inspire hope on a daily basis and the most important thing people need to know is that they’re not alone, these feelings won’t last.

“Coping mechanisms aren’t the same for everyone but the more we’re able to share, the more we’ll be able to help. I would urge people to get involved with the ‘Month of Hope’ because you never know who it could help.”

Members of the public, service users, staff and carers are encouraged to send what has made them hopeful to involvement@cntw.nhs.uk. The messages will be shared via the Patient and Carer Involvement Team and the Trust’s social media.

CNTW is a leading provider of mental health and disability services in the North East and North Cumbria.