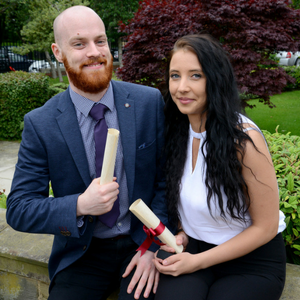 Two nursing students working with Northumberland, Tyne and Wear NHS Foundation Trust have been awarded for their efforts while undertaking their degree programmes.

The Heath Award, which was established in 1892 by George Yeoman Heath, former President of the Royal College of Medicine, is presented each year to the best nurses and midwives graduating from Northumbria University’s nursing and midwifery programmes. The winners were chosen after being nominated by academics and hospital staff who worked with them on placement.

Those studying nursing and midwifery degrees at Northumbria University spend half of their time at the University, and the other half of their time on placement in hospitals and community settings across the region, where they are able to put their new-found skills into practice.

Nicola, who had a baby during her degree and continued with her studies, began her career studying healthcare at South Tyneside College, following in the shoes of her sister – a learning disability nurse – before starting her degree at Northumbria. Now working for Northumberland, Tyne and Wear NHS Foundation Trust at Hopewood Park, Ryhope in Sunderland, Nicola works with adult mental health inpatients.

Nicola said: “I feel incredibly honoured, but also  feel like I haven’t done anything special. I never thought in a million years that I would qualify for the award, let alone be nominated.”

I absolutely love mental health nursing. It is such a rewarding and enjoyable career.

Tom was diagnosed with ADHD at the age of five. He works for Northumberland, Tyne and Wear NHS Foundation Trust caring for young people in the community in Newcastle and Gateshead.

He said: “Following my early difficulties I have always wanted to give something back and be a role model and inspire others. I originally wanted to go into the military but after a year working as a support worker I decided I wanted to support children and young people and started a mental health nursing degree course within the year.

“I absolutely love mental health nursing. It is such a rewarding and enjoyable career. I am absolutely ecstatic about the award. It’s so nice to be recognised for all the hard work; however it also makes me feel quite humble as there are lots of others on the course who also deserve it. The tutors and students are so supportive.”

Tom now speaks about ADHD across the UK and has helped set up parent education groups where parents of children diagnosed with ADHD are offered support, education and advice. Tom also had another cause to celebrate, having met his partner on the course too.

Dr Phil Adams, Chair of the Heath Trust, said: “It is such a great honour to be involved in these awards. They were bequeathed to celebrate excellence in the practice and theory of general nursing and midwifery. These students have been selected as winners not only for their excellent academic and clinical performance, but also for the behaviours and qualities they have displayed whilst training. Nursing and midwifery are such critical roles and excellent nursing makes all the difference to the care patients receive and these winners are very worthy recipients indeed.”

Professor Amanda Clarke, Head of Nursing, Midwifery and Health at Northumbria University, said: “The standard of nominations for the awards has, yet again, been incredibly high. At Northumbria we are incredibly privileged to have such diligent, compassionate and high achieving students who develop into high quality, skilled professionals.  It is a real honour to teach and work with them, and I am absolutely delighted that their efforts have been recognised.”

The students were presented with their awards – a medal and certificate – at a special ceremony by Dr Kath Mannix, a former Consultant in Palliative Care, at Newcastle’s Royal Victoria Infirmary.